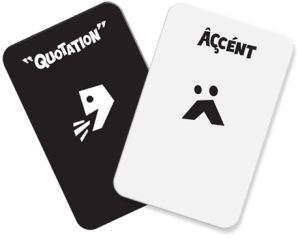 The latest addition to the growing “badult” games sector is this accent based card game that has the potential to utterly humiliate you amongst friends or indeed show off your mimicking skills to the max. Played in teams of two or more you’ll pick a quotation card and read it in out in your normal drawl then upturn the next accent card from the pile and then you’ll have just 30 seconds to get your team mates to guess which accent your attempting. You’ll find Norfolk quite challenging under pressure and end up  slipping into Cornish quite often, and as for the Egyptian card, well, good luck. Get yourself a set at accentuategames – A nifty piece of research arrived with the game earlier today, read on to find out who loves a bit of posh and why Irish eyes are once again, smiling….

The Irish accent was voted the most attractive in a the poll which looked at people’s perceptions of various UK accents. The survey of 2000 UK adults, commissioned by new adult party game, Accentuate, saw the Irish accent pull in a 22% vote, with a quarter of women putting it top. The inhabitants of Norfolk scored less than 1% in the attractiveness stakes, with only 3% voting for their own accent.

Dr Graeme Fraser-Bell, inventor of new guess-the-accent party game, Accentuate, comments, “With accents being such a badge of honour, indicative of culture and status, I’m surprised more people haven’t voted for their own in more of the categories.”

The survey also revealed the Queen’s English as the most trustworthy, with almost 30% of the national vote, while the Yorkshire accent secured an impressive second place with 12%. The accent of the East once again didn’t fare so well, with only 1% voting the Norfolk accent trustworthy.

Bucking the patriotic trend of regions like Scotland and Wales, which regularly put their own accent top in the poll, only 3% of people in the North West found their own Scouse accent trustworthy, while less than 1% of people in the East think the East of England Norfolk accent sounds intelligent.

The survey showed the Queen’s English leading by a country mile in the intelligence stakes too, with over 60% of the national vote as the smartest sounding accent. Cornish came in with a paltry 1% of the national vote, but even fewer South Westerners voted for it, whilst almost a fifth (17%) of Yorkshire people said their accent was the most intelligent.

Almost a fifth of people in the UK (18%) felt Geordie was the second most difficult accent to understand behind Scottish (25%) but the nuances of Norfolk shone through this time putting the accent right beside the Queen’s English as easy to understand.

Brummie landed the slot for second most popular accent that’s mimicked by Brits for comedy value, with 12% of the national vote, just behind Scouse on 18%. The Yorkshire accent pulled in 10% of votes in the North as the one they’d use for comedy effect.

Commenting on the findings, Dr Fraser-Bell said, “The diversity of accents across the UK is a result of hundreds of years of both foreign influences and close communities. We have some of the most definitive regional dialects of any country in the world.”

Toyologist Pete Jenkinson regularly writes about toys in national newspapers like The Sun and The Mail. This super-dad has an unmatched passion and dedication for trying and testing the latest, coolest and most interesting offerings from the world of toys.
@toyologist
Previous Capital gets the Top Trump treatment
Next Technic’s latest set – A stunning Swede