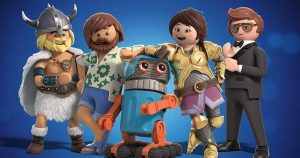 Finally it has arrived, the trailer for Playmobil: The Movie is here and we love it. Of course the naysayers will say “cashing in on the success of the LEGO movie” and the yaysayers will say yay – and with the amount of money that film franchise has made why the heck not. We should be able to cast our eyes over the toy range at some of the toy fairs in early 2019 but for now we’re psyched for the film which has plenty it appears to differentiate itself. We have Lino DiSalvo making his directorial debut after spending 17 years at Disney Animation, this DiSalvo chap was the head of animation on Frozen, which just happens to be the highest-grossing animated movie of all time.

Playmobil: The Movie starts out with a brother and sister being sucked into the Playmobil universe. Charlie disappears and it’s up to his sister, Marla to find him in this bizarre new world. Whilst on this mission she befriends Del, a food truck driver played by comedian Jim Gaffigan, a secret agent chap played by Harry Potter star Daniel Radcliffe, a misfit robot, and a fairy-godmother played by musician Meghan Trainor. This $75mn project has some other famous voices, a few original tracks and we’re certain it has what it takes to be a box office contender.

Toyologist Pete Jenkinson regularly writes about toys in national newspapers like The Sun and The Mail. This super-dad has an unmatched passion and dedication for trying and testing the latest, coolest and most interesting offerings from the world of toys.
@toyologist
Previous Get them before midnight or they’ll turn into Pumpkins – Its Fairy Tale toy time
Next Board Games for Boxing Day boredom busting