Only Fools and Horses fans – This way please

Peter Jenkinson July 30, 2020 News Comments Off on Only Fools and Horses fans – This way please 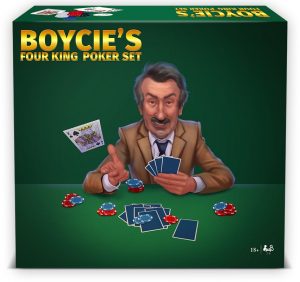 A replica of that Yellow Trotters Independent Trading van, a flat in Peckham perhaps – all aspirational objects for fans of the show, here’s one for just £14.99 though and we think you’ll like it. Boycie in Belgrade is a new documentary featuring John Challis as he sets of to Serbia to find out why the iconic show is such a hit over there. So, time for you luverly jubbly lot to re-enact that iconic poker scene from the infamous episode Losing Streak, featuring Boycie’s famous line “For Four Kings Sake!” This new bit of merch is from a chap called Lazar Vukovic. This Boycie’s Four King Poker Set has a deck of cards, 120 poker chips, a special digitally signed photo of Boycie , dealer button and the tres-important x4 extra kings.

Toyologist Pete Jenkinson regularly writes about toys in national newspapers like The Sun and The Mail. This super-dad has an unmatched passion and dedication for trying and testing the latest, coolest and most interesting offerings from the world of toys.
@toyologist
Previous Hot Wheels sketches of cars arriving in 2021
Next Tech infused old school play