Dangermouse Stamps – Get some!

Peter Jenkinson September 26, 2015 Uncategorized Comments Off on Dangermouse Stamps – Get some! 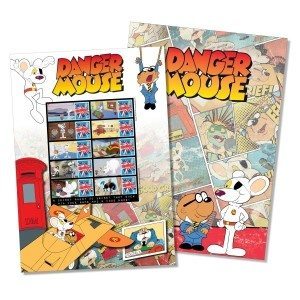 We bring you amazing and fantastic news from Danger Mouse HQ regarding the International super spy and his Royal Mail association. An A4 stamp sheet portrays ten scenes from the iconic series with all the characters to boot. Penfold, colonel K, Baron Greenback characters included. The A4 sheet portrays ten scenes from the world famous cartoon series and includes all the key characters – Danger Mouse, his chum Penfold, his boss Colonel K and evil genius Baron Greenback all alongside ten First Class Union Flag stamps. The series Danger Mouse series began 30 years ago and ran for 161 episodes, it came third recently in a 100 Greatest Kids’ TV Shows programme behind The Muppet Show and The Simpsons. In 1983, the Danger Mouse viewing figures hit an all-time high of 21.59 million viewers and now it is back on the tellybox with Fremantle Media and on the Beeb with a run of 52 episodes. Happy days indeed, Crikey and Crumbs in fact!

Toyologist Pete Jenkinson regularly writes about toys in national newspapers like The Sun and The Mail. This super-dad has an unmatched passion and dedication for trying and testing the latest, coolest and most interesting offerings from the world of toys.
@toyologist
Previous Instant Magician “Just like that”
Next Music to your ears