Peter Jenkinson September 17, 2015 Uncategorized Comments Off on Instant Magician “Just like that” 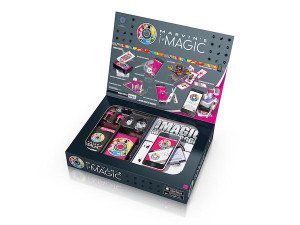 Describing itself as ‘the future of magic’ Marvin’s iMagic is possibly marking the beginning of the UK’s leading magic brand into the world of fortune telling too?

Marvin’s iMagic interactive Box of Tricks combines props, video effects and an app to give you a bunch of tricks that are generally rather good.  From augmented reality tricks and mind reading to card tricks and x-ray shenanigans. As an app is at the core of this new way to perform illusions and such we’re likely going to get new tricks added over time, and we rather like that.

It’s a meaty app at 450MB but gives you a simple user interface to access the 20 tricks with ease and access to video tutorials – which we liked plenty. The videos are slick and each trick has one performing and another one explaining how the trick is done, but, blink and miss anything and you have to sit through it all again – There isn’t any rewind. Version 2.0 maybe Marvin?

Worked bother free on all our iOS devices, kids learn some new words when we tried it on our Android. Overall, for something this unique and at this price point I’d say it’s an absolute banker of a gift for anyone under ten – Be warned though, of they haven’t their own device you can say sayonara to yours for a while.

There are a couple of pub worthy tricks in the kit too giving it an extra point and drawing us ever closer to the buy button. It’s a 7/10 from us – £24.99 HERE

Toyologist Pete Jenkinson regularly writes about toys in national newspapers like The Sun and The Mail. This super-dad has an unmatched passion and dedication for trying and testing the latest, coolest and most interesting offerings from the world of toys.
@toyologist
Previous Trench Run time
Next Dangermouse Stamps – Get some!