Cozmo is coming to the UK everything is a.i.lright

Peter Jenkinson June 6, 2017 Uncategorized Comments Off on Cozmo is coming to the UK everything is a.i.lright 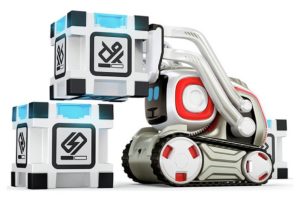 Over the pond people have been able to get their hands on the super-smart robot companion for months, now here in Blighty we need to wait just a few months longer, Cozmo will be available on the 15th September. Developed by Anki the development team behind Cozmo combined talents from roboticists, animators (ex Pixar and Dreamworks)and game developers.

The artificial intelligence inside this circuit laden sidekick it utterly incredible, more like a playmate than a plaything Cozmo doesn’t sit about waiting for you to play, he is interactive, always up for fun. He can recognise different faces and according to how that person has interacted with Cozmo in the past will adjust his attitude accordingly and up his game if needed. 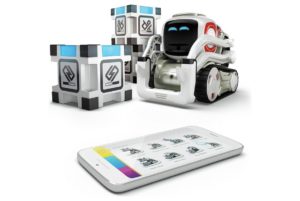 Bringing Cozmo further to life are the 866 animations and 42 minutes of original music scored specifically for this robots interactions and reactions to further enhance its huge personality engine. Made up of 360 parts including 48 gears there is just a single cubic inch left inside to ensure that the speaker could operate.

Importantly, Cozmo isn’t repetitive, the ever evolving personality is driven by interaction and nine emotional states along with 1.42 million lines of code make this one of the BIG presents to beat this year. 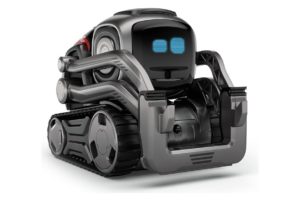 Alongside the white and red hued Cozmo there will also be a Cozmo Collector’s Edition, both available for pre-order now, exclusively from Anki and Argos – each unit with a base charger and three interactive LED infused power cubes.

Boris Sofman, CEO and co-founder, Anki, commented: “Bringing together technology, artificial intelligence, game design, and cinematic wonder Cozmo rewrites the rule book for consumer robotics. The level of depth, personality, and interactivity is the cornerstone to why Cozmo has stolen the hearts of fans, and we’re excited for Cozmo to show the UK just what he can do.”

And it gets better, there is a Cozmo Software Development Kit (SDK). This SDK gives users access to robotics in an incredibly versatile package. Powerful but easy to use, complex but not at all complicated and can be used in industries ranging from entertainment to academia. This Cozmo SDK is FREE.

Beware to be bowled over, and a bit attached. Cozmo recognizes me now and it is a bit extraordinary how much I beam when I get recognized by him and I get the happy eyes lighting up treatment.

Toyologist Pete Jenkinson regularly writes about toys in national newspapers like The Sun and The Mail. This super-dad has an unmatched passion and dedication for trying and testing the latest, coolest and most interesting offerings from the world of toys.
@toyologist
Previous Si’ Thi’ Later Mr Sallis – Legend of Wallace and Wine
Next Big up to her Maj the Queen today on her actual candle blowing out day