Peter Jenkinson November 21, 2017 Uncategorized Comments Off on Cutting right through the Star Wars toy chaff – The Jedi training ball is the dogs undercarriage 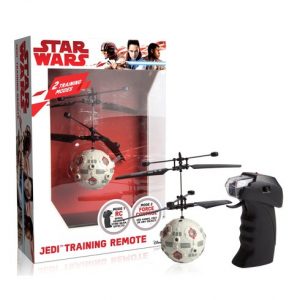 “Too many Star Wars toys out there there are” as one little green man whose name rhymes with soda never ever said. Hard to disagree with these wise words though is it not? We’ve championed a few, and, ahead of the pre-xmas release of the new film, have a few more playthings we’re also fans of, just feels like there’s too much Star Wars stuff. So, when stand out licensed kit arrives it is time to shout, this miniature droid used by Luke back in 1977 is a Jedi Training Remote, propeller powered (aka The Force) it can be used in two modes. Mode one gives control using the remote control unit and mode two ‘Force Control’ which sets the Jedi Training Remote into Auto Hover using A.I. and you control it with a wave of the hand, foot, or other solid object (lightsaber toy preferred). At just £25 this is the toy you are looking for.

Toyologist Pete Jenkinson regularly writes about toys in national newspapers like The Sun and The Mail. This super-dad has an unmatched passion and dedication for trying and testing the latest, coolest and most interesting offerings from the world of toys.
@toyologist
Previous Lightseekers: Boulder & Zyrus – The new boys on the block are pure rock & scroll
Next No avoiding the cricket – embrace it with a game