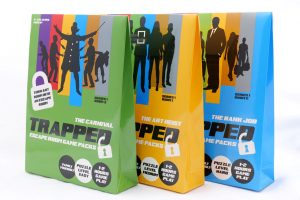 Until recently escape room games were certainly a niche genre – now though, the choices are almost overwhelming. There are board games with elaborate components, app-supported card games, giant plastic devices, print at home games and so many other variations. So, with all of these options, how do you stand out? Trapped have decided the way to go is to lift and shift escape rooms directly into your home.

The concept is simple. You’ve a bunch of printed materials such as posters, pictures or fake locks designed to look like something you would find in an actual escape room. Follow the instructions and stick everything to your walls or place them around whatever room you choose (they do suggest a bathroom but mine is a tad small). Then, you just play it as an escape room.

The puzzles are professionally created, varied in style, and mostly importantly, they are actually good. There were no logic leaps needed, they’re presented thematically and the art and print quality is of a high standard. It really helps you feel immersed in a game when everything makes sense, and you can tell a lot of thought went into making sure that happened. I would say that if these were real components (not just paper) within a real escape room, they’d still be great to play.  Each edition also has a fun little part to finish the ‘escape’ giving you a nice way to end the game.

Trapped definitely succeeds in capturing the escape room feeling. Going around an area to find and solve puzzles, trying to figure the answer out independently or working as a team. The feeling of realising something you worked out combines with something else across the room to give a code or an answer, it’s all there and such an integral part of doing an real live escape room. Other creators take note now we’ve had a backside budging take-out escape room game we’ve realised how much other titles suffer for not having it.

Ironically for Trapped, whilst sticking stuff to a wall makes it a better escape room, it can be quite tedious. The set up for 2 of the games took 20 minutes. For the other I just put it all on one wall because I just wanted to get on with playing. Further, even though I didn’t know what was on the materials, I knew where everything was located. My rooms are pretty nerdy, but a fake magician poster or bank blueprints are still pretty obvious no matter where I stick them, and it’s hard not to feel like the setup was a waste of time for some of the easier games.

Overall, the Trapped games are good fun, enjoyable to play and the only thing I can fault puzzle wise is that they were all a little easier than their difficulty suggests, which is probably a subjective point considering how many escape rooms I have done*. The setup is going to put some people off the concept, but if you’re playing with multiple groups within your family or maybe co-workers, or you can get a non player to do this bit, then playing Trapped is definitely a worthwhile way to spend your time.

Easy level game with a child friendly theme. Puzzles are very self explanatory but still good. Has a score system rather than an escape/time limit which is kinda irrelevant if you’re playing as one group but as a competition between family members would be fun. 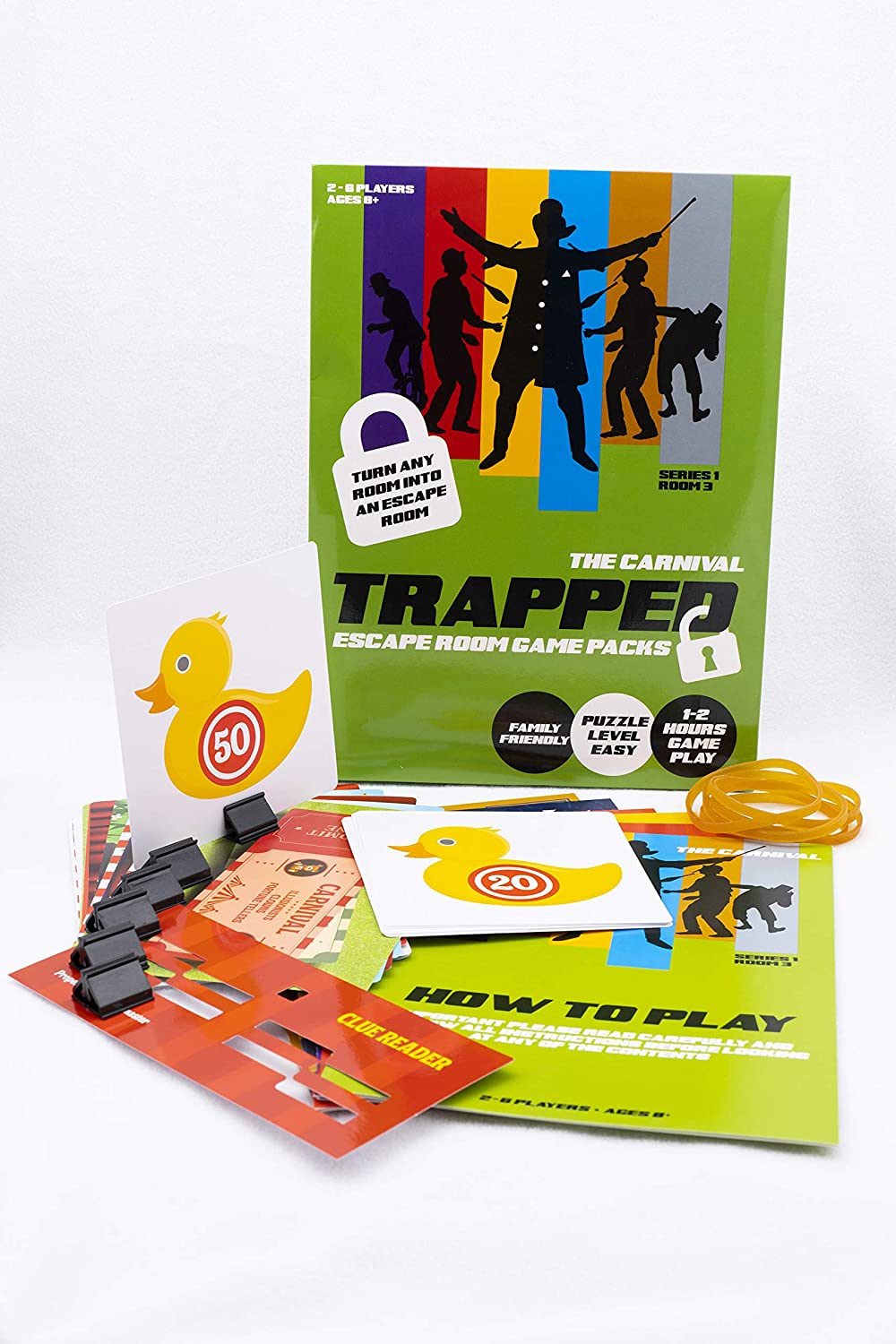 An interesting theme for an escape game, and whereas the end goal is to steal a painting, the puzzles are themed around working out which is the one to steal. Very non linear, as are all theTrapped games in fact, as you have to combine all the knowledge at the end to come to a conclusion. Not overly challenging but the puzzles are presented in a clever way. 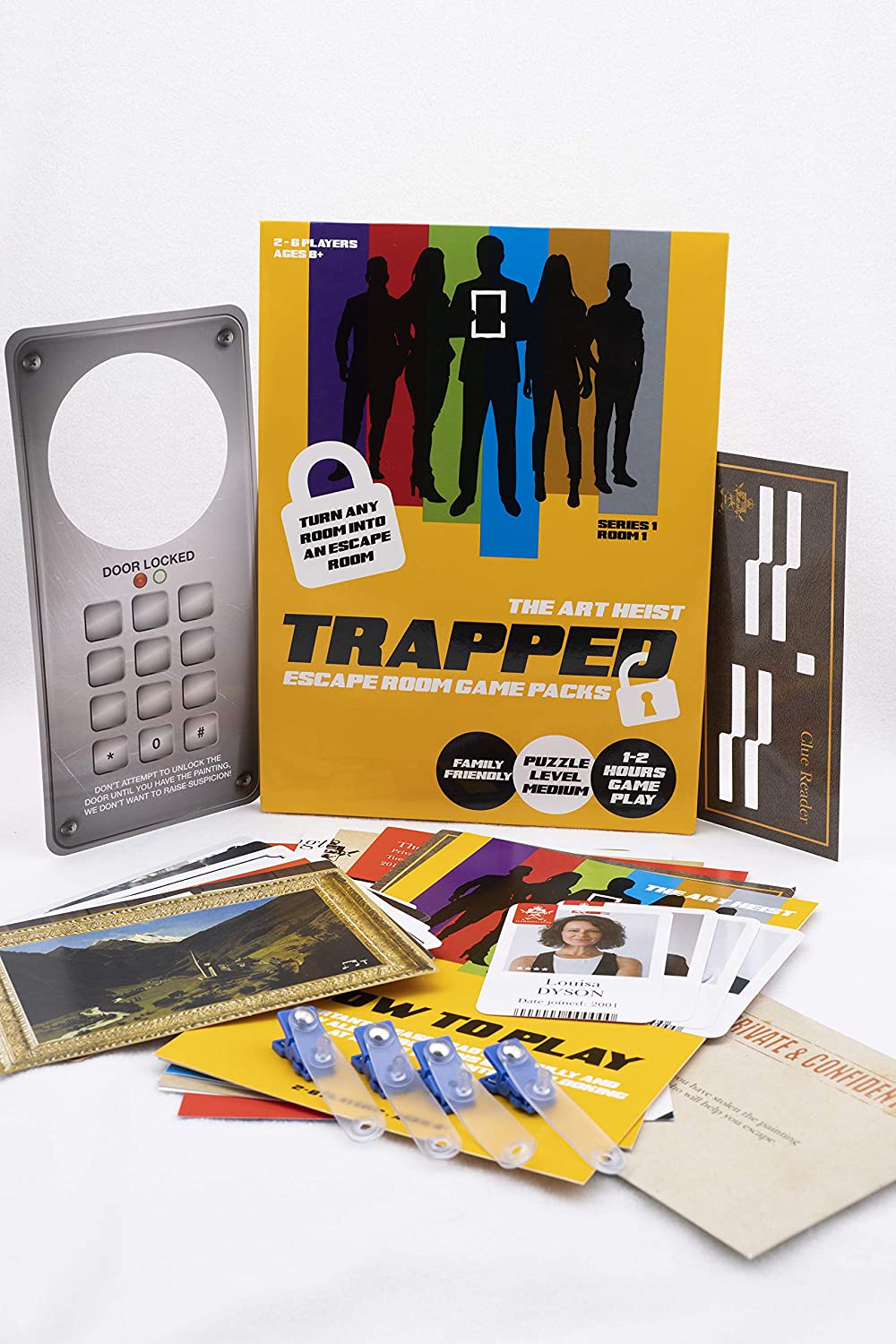 The ‘hard’ level game, and definitely one for people who want a challenge or are escape enthusiasts. As with all the Trapped games, lots of really thematic bank robbery style puzzles as you have to break into a vault and steal the gold. Has a lot of puzzles where you have to find/solve multiple things to get the answer, and once you get the gold there is a brilliant logic puzzle for the final escape. 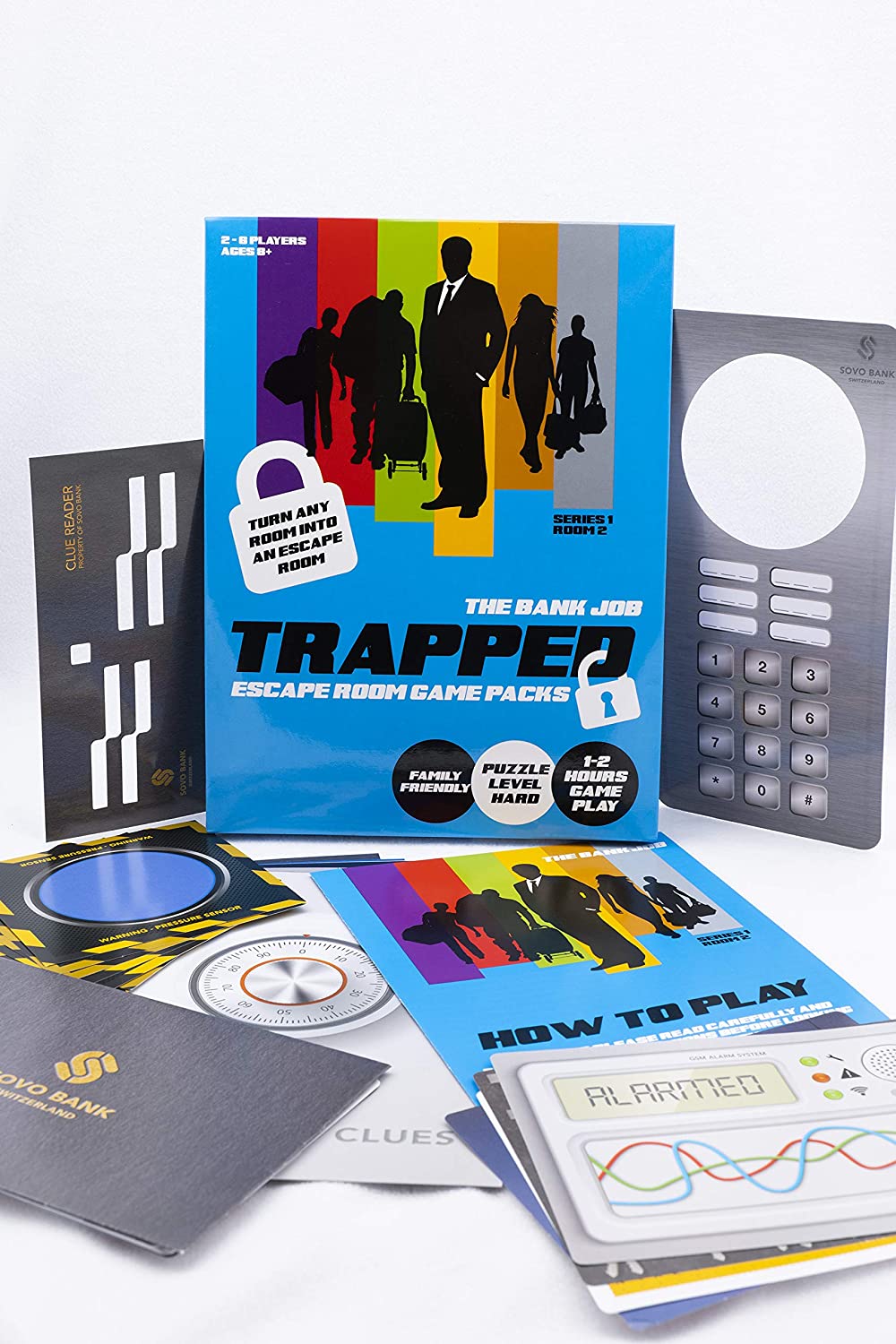 Trapped, from Golden Bear Toys, is available everywhere, but here is a handy Amazon link

*Editors note – Danny has at least 100 Escape room experiences under his belt and is super-competitive.

Hi, my name is Danny I am a game designer and puzzle enthusiast living in London who can often can be found drawing stickmen, playing board games or thinking about burgers. Growing up with two brothers gave me an over competitive nature which comes in really handy for my main hobby - doing escape rooms. I've done these across the world, winning competitions and setting numerous records along as the way as well as maintaining a 100% record of escaping. My favourite games and puzzles often include numbers or abstract colours and patterns and I recently learnt how to escape a straight jacket (which came in handy surprisingly quickly)
Previous Medieval looking music machine is an utter joy
Next The Crew – The Quest for Planet Nine bags a gong