Blockbuster with your blaster

Peter Jenkinson October 8, 2014 Uncategorized Comments Off on Blockbuster with your blaster 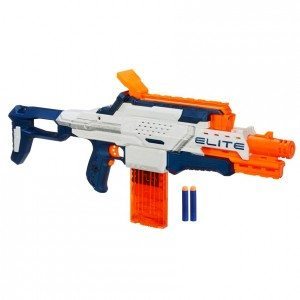 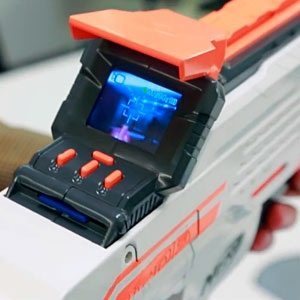 We feel like we’ve been waiting on this one for an age, we’ve been running about the place with our NERF arsenal for a while now with GoPro’s strapped about our bodies but Hasbro are finally allowing us to cut down on the kit we have to carry to record such antics.

The NERF Cam ECS-12 blaster is equipped with a name that trips off the tongue and a stills/video recording camera that captures the action from atop the stock, select your mode and then ACTION. Replay the footage on the on-board screen before whipping out the included 4GB memory card to edit, share, send to a director who might be interested in this stuff.

Slide the slam fire handle back, hold the trigger down to unleash a stream (max 12 per clip) as you attempt to achieve, standing down wind, atop a cliff perhaps the claimed 85 feet for these new breed of Elite darts.

You’ll need a healthy defence budget for this latest arrival, £84.99 almost everywhere in the UK, you could opt for a tactical rail accessory to hold you mobile and record that way, but, if your altercations are energetic this’ll not be sturdy enough.

It’s one for Die Hard NERF fans with a decent budget yes, but putting a price on this POV shots of mates getting a good blasting and “incoming” heading your way – Priceless?

Toyologist Pete Jenkinson regularly writes about toys in national newspapers like The Sun and The Mail. This super-dad has an unmatched passion and dedication for trying and testing the latest, coolest and most interesting offerings from the world of toys.
@toyologist
Previous PEZ stable welcomes new ponies
Next Just when you thought it was safe….