Just when you thought it was safe….

Peter Jenkinson October 13, 2014 Uncategorized Comments Off on Just when you thought it was safe…. 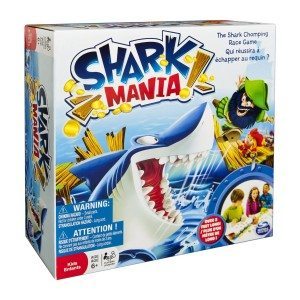 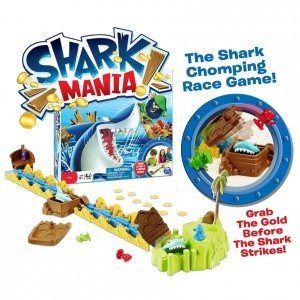 We’re fans of all things Shark based here at Toyology Towers, its the real thing that freaks us out. Shark slippers, swim Fins and helium filled flying remote control sharks and ones toting laser beams – Yes, laser beam toting sharks. Toy manufacturers appear to have been reluctant to deliver a decent shark based board game, this new frantic n fast Shark Mania game from Spinmaster is well worth some of that precious space in your under-cupboard collection of rainy day plays.  Assemble the track, well pathway leading over the waves, start to safety it is a metre in length, object of the game is to roll the dice and race your plastic pirates along picking up gold coins along the way. This would all be fairly sedentary if it were not for the approaching shark who is tethered to a string that is slowly but surely approaching being pulled along by a clockwork mechanism. This latter part of the game means it’s a no-holds-barred-reaching-for- the-dice-as-soon-as-it-has-been-thrown-by-the-last-player type of game, although not a genre in its own right, it should be, we love these seat of your pants plays and Shark Mania is about as good as they get. Point your barbels this way for yours

Toyologist Pete Jenkinson regularly writes about toys in national newspapers like The Sun and The Mail. This super-dad has an unmatched passion and dedication for trying and testing the latest, coolest and most interesting offerings from the world of toys.
@toyologist
Previous Blockbuster with your blaster
Next Golden Brickies set to overshadow Oscars*