Selfies, singing and lots of social

Peter Jenkinson July 20, 2016 Uncategorized Comments Off on Selfies, singing and lots of social 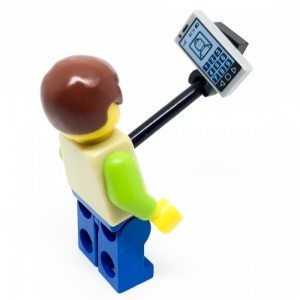 Human evolution couldn’t keep up with the rise of the reverse camera shot, the selfie that is, so an entire extendable “limb” had to be developed at speed, people simply couldn’t get the shot they wanted. People weren’t willing to put up with these sub-standard self-portraits with parts of their person missing, something had to be done – and quickly. The masters of tech heard the increasing dissatisfaction of the smartphone owning public and set to work creating a gadget so fiendishly brilliant it would become an overnight phenomenon. 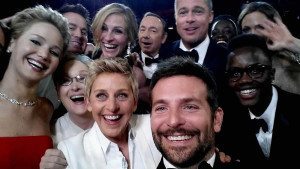 So brilliant was the Selfie Stick when it arrived on the shelves there was talk of mass hysteria somewhere when the first stockists opened but we can find no evidence of this.

Their popularity has however led to some naysayers, spoilsports if you will, banning them from The Palace of Versaille to Old Trafford, Disney to Alton Towers, the 02 to Disney Orlando – No selfies here please. 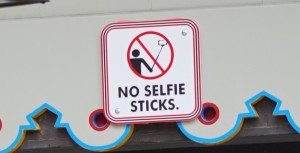 We love a selfie, and the world does too (mostly) some of the greatest snaps you’ll ever take will be done this way and if you’ve a stick they’ll be even better right? Wrong.

There’s a new gadget in town, no not the selfie toaster (yes that does exist) it is the greatest breakthrough in performing arts technology we’ve seen for some time, this piece of kit doesn’t just want to you stay static for your snap(s) this one wants you to sing, dance and share your strut far and wide – The SelfieMic is here and we love it. 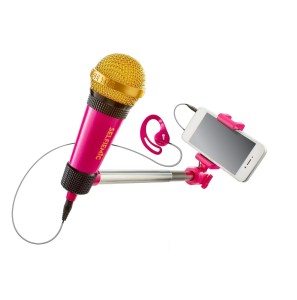 After a quick smartphone app install (iOS and Android) of the Starmaker karaoke app place your device in the super-secure phone holder at the end. Extra vice-like grip has gone into the design, spring-loaded for ease of operation, but the makers were mindful of the operators likely need to conduct plenty of groovin’ and a moovin’.

Once your phone is plugged in (4.5mm jack) select your song, choose some filters for your performance perhaps and hit play. Words appear on-screen, you hold that mic and sing like nobody is listening and dance with that very same attitude in mind and, when your show is over share it socially and wait for those connections to come in. These connections to which we refer might imply it is talent seekers looking to book you but equally it could be from friends who would like to join your next performance.

Each SelfieMic comes with 1,000 Starmaker credits to get you access to a vast library to sing or lip-synch along to including, but far from limited to Beiber, Swift, Grande, Little Mix and Sheeran (Ed).

Created for a specific age group perhaps, the 9-12 year-old people can just wait in line. This is the take-everywhere-karaoke-machine we’ve waited since the eighties for so parents may well buy you one for your pop singing fun but, their need to pick it up and have a play when those people have gone to bed will be hard to resist.

Kids, mums and dads across the nation will be making videos of cringeworthy quality, there is little you can do apart from make more of them, flood your channels with SelfieMic content, the personal performance revolution is here and we have a duty to sing.

Check out #selfiemic or #selfiesquad for some performances already delivered online with the all-new SelfieMic – just £19.99

Toyologist Pete Jenkinson regularly writes about toys in national newspapers like The Sun and The Mail. This super-dad has an unmatched passion and dedication for trying and testing the latest, coolest and most interesting offerings from the world of toys.
@toyologist
Previous Game of the Year aka Spiel des Jahres
Next A Mazing Games