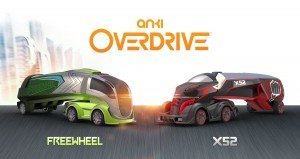 At ANKI HQ they have the ability to deliver remote updates to our gameplay at will, it makes it, as a consumer of the game, a very exciting proposition, a bit like getting FIFA 16 for free if you’ve already bought FIFA 15. Their extensive line-up of A.I. riders and weapon systems in the current car line-up is pretty good but the robotics company have just announced two new Supertrucks to add another dimension to play. These battle rigs, Freewheel and X52 are about three times the size of the current rides and, on-track, appear intimidating. Size however isn’t everything, these new Supertrucks have powerful new weapons and new game modes that, even for seasoned ANKI players, have enough points of difference to offer me that WOW factor from the very first time I played. Each Supertruck has a new weapon , the X52 a Pulse Ram to blast others off the track and the Gravity Trap of Freewheel to disable opponents cars. As well as commanding Supertrucks in any of the ANKI Overddrive gameplay modes there is an exclusive game called Takeover. You start your game in a Supercar and, if you can break through the Supertruck defences you get to take over the rig, cause chaos on the track and continue to do so until another player gains control of the rig. Andy Roberston, Editor of these spankingly good videos, and Editor at Familygamer TV says ““Anki Overdrive Supertrucks adds considerable value for racers of all ages. The new trucks look great and create some super cat and mouse tactics as players battle to take on the big-rigs. Clever game modes share around the trucking fun, while new weapons and upgrades ensure longevity.”

Both FREEWHEEL and X52 are coming to the UK from early October and will set you back £59.99.

The Supertrucks were created by Hollywood car designer Harald Belker, whose graphically bold vision and style for futuristic vehicle design has been seen in films such as Minority Report (2002), TRON: Legacy (2010), and Total Recall (2012). The Supertrucks are bigger, rougher, and more dominating on the track than the current Anki OVERDRIVE Supercars – but that doesn’t necessarily mean they will rule the road.

Toyologist Pete Jenkinson regularly writes about toys in national newspapers like The Sun and The Mail. This super-dad has an unmatched passion and dedication for trying and testing the latest, coolest and most interesting offerings from the world of toys.
@toyologist
Previous Boardgame fans heading en masse to the Midlands
Next Swim like a fish