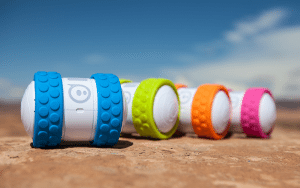 The robotic ball has long been a favourite in the Towers, we’ve Bluetooth controlled almost daily for many months, in the early days as we we’re testing out the new apps that arrived almost daily, augmented reality beavers is hard to beat and late night driving enjoying the multitude of hues it emits, with the lights off. We’ve certainly had well above our moneys worth, even now as a cat toy it’s hard to beat, but we’ve been waiting for the next trick to appear from up Orbotix sleeve, and here it is – Meet Ollie. This app controlled dual wheeler bears little resemblance to its sibling, is packed with tricks and an even smarter brain, this chap is built for speed (6.3 metres per second thats 14mph). a tap on your smartphone (Windows, Android and iOS) to get spins, drifts and flips as well as customisable moves and of course just flat out forwardness. You’ll be able to pimp up your Bluetooth ride with hubcaps and, if you get over to Thingiverse theres a section devoted to customising those caps and much more besides. We’ll just leave you with the news that the chariot, designed to stick a Sphero underneath and thus rekindle your love affair with it, won’t be available until November but we eagerly await the chance to load ours up with LEGO and the like. £79.99 for yours, head this way please, form an orderly queue. 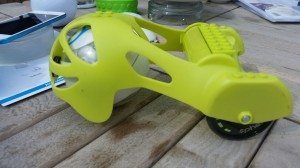 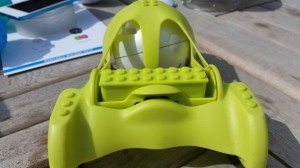 Toyologist Pete Jenkinson regularly writes about toys in national newspapers like The Sun and The Mail. This super-dad has an unmatched passion and dedication for trying and testing the latest, coolest and most interesting offerings from the world of toys.
@toyologist
Previous Water wars – Up the ante
Next The Golden Brickies are here – The Intergalactic awards for all…