The Golden Brickies are here – The Intergalactic awards for all…

Peter Jenkinson September 15, 2014 Uncategorized Comments Off on The Golden Brickies are here – The Intergalactic awards for all… 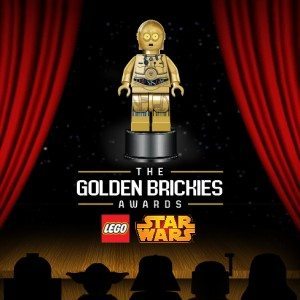 ..well, if you’ve got yourself some LEGO Star Wars that is, and if you haven’t then this is the perfect excuse to pop out and buy that Death Star or Millenium Falcon after which you’ve been hankering these past months.  The Golden Brickies are going to reward families with the most creative LEGO Star Wars builds, they want to see your humorous side whether you’ve chosen the dark or brighter side and send in your best photo and filming efforts to them with your mini figures and vehicles in action, recreating scenes or creating your own, stills or videos, and upload them to the Golden Brickies page on the LEGO Facebook page, Instagram or on Twitter using #GoldenBrickies – The competition runs till the 26th September and then the judges, Star Wars man Warwick Davis, collector fanatic and writer Jedi James Burns, LEGO Star War Brand Manager Eloise Kurtis and LEGO Star War biggest fan Milun Simpson, aged 5 will pick their best across several categories with the winner announced at a red carpet bash at LEGOLAND Windsor on the 11th October. Win LEGO, get a bespoke C3P0 trophy, annual park passes and kudos beyond compare. Take some annual leave now parents and do it for your children, they can help when they get back from school, spend your money on Star Wars LEGO sets, dip into your savings, these are the categories you’re fighting for :

Inspiration is this way – See you on the red carpet

Toyologist Pete Jenkinson regularly writes about toys in national newspapers like The Sun and The Mail. This super-dad has an unmatched passion and dedication for trying and testing the latest, coolest and most interesting offerings from the world of toys.
@toyologist
Previous Sphero took some Steroids
Next Katy Perry has a new pet