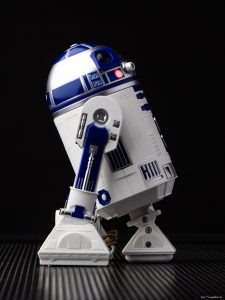 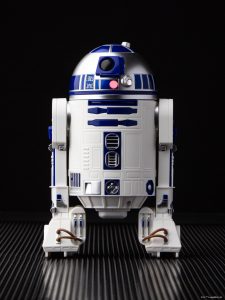 We were treated to a plethora of playthings earlier today at the Disney store in London. Multiple brands unveiled their 2017 homages to Star Wars and we’re of the opinion that this line-up of stuff ahead the Last Jedi release later this year usurps that of the original Force Friday in 2015. Here’s a selection of snaps from the event, we’ll be rounding each up individually over the coming weeks in more detail. For now, our star of the show is from Sphero – creators of the app enabled BB8 a couple of years back, this time they’re bringing the veteran of the Rebel alliance to us in app-enabled form and it is superb. They’ve updated their app so you’ll now be able to control this one, the older BB8 and their other new arrival the app-enabled BB-9E of the First Order, all on one interface. This Artoo unit has unique movement, can conduct himself on two or three tripods, has single button moves (including the one from the 77 film where the Jawa tie his legs and he shrieks/shakes and falls over – Its all in here. Original sounds, flashing LED’s, spinny head and holographic simulations to explore Star Wars environments. Priced at £179.99 this get the big toy thumbs up from Toyology Towers.

Toyologist Pete Jenkinson regularly writes about toys in national newspapers like The Sun and The Mail. This super-dad has an unmatched passion and dedication for trying and testing the latest, coolest and most interesting offerings from the world of toys.
@toyologist
Previous Star Wars Force Friday Episode II
Next Star Wars recreated, Cantina included