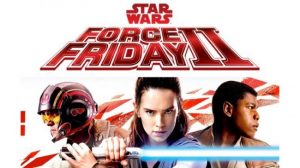 Technically it is Force Friday II, the first one happened parsecs ago – well two years to be exact.  It is part marketing ploy to get us all hyped about new kit from the forthcoming film yes but it’ll genuinely give all Star Wars fans plenty to speculate about in terms of plot lines and show us new characters.  The embargo lifts today at 4:01pm UK time, Friday down under. There’ll be loads to talk about, perhaps not that much rumoured“biggest ever LEGO set” just yet but new action figures, new LEGO, new remote controlled droids, new vehicles, new variants on familiar faces. There is also a Disney augmented reality app that works with in-store displays – some 20,000 retailers across  30 countries are taking part. The Star Wars mobile app enables you to see a life-sized digital version of the character for you to take photos with. On iOS you can record video and there’ll be a brand new character release on it as well as Admiral Ackbar, Chewie and Stormtrooopers. The app is already live, just not all the elements ready just yet. Share your snaps using #FindtheForce on Instagram or Twitter for chances to win prizes and premiere tickets.

Toyologist Pete Jenkinson regularly writes about toys in national newspapers like The Sun and The Mail. This super-dad has an unmatched passion and dedication for trying and testing the latest, coolest and most interesting offerings from the world of toys.
@toyologist
Previous Air Wars Battle Drones – Flying, fighting fun, fun fun.
Next R2-D2, it is you, It Is You !