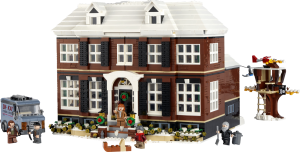 To celebrate the launch of the new LEGO Ideas Home Alone set, the LEGO Group is celebrating Kevins across the globe.

So, we have the house, a decently detailed one at that, a LEGO minifigure version of Home Alone icon Kevin McCallister, plus four other minifigure characters from the movie. The LEGO Group has decided to launch this set and celebrate Kevins everywhere with research in partnership with Eleanor Turner, author of Baby Names 2022. It shows that Home Alone’s Kevin McCallister, who was born 1982, arrived during a period of popularity for the name Kevin in the UK, when it ranked at #40 overall, peaking at #11 in Scotland and #40 in England and Wales. In Northern Ireland, the name Kevin reached its peak at #60 in 1998. However, naming records show there have been fewer Kevins born in recent years, which fuelled LEGO’s inspiration to launch a global search for Kevins everywhere.

Eleanor Turner commented: “Given the popularity of the name Kevin in the 1950s and 1960s and latterly the 1980s when Kevin McCallister would have been born, you’d be forgiven for wondering ‘where are all the Kevin’s?’ Though the data suggests the name has had its heyday, there are still plenty of reasons to celebrate the name, and to join the LEGO Group’s global search in honour of one of history’s most-loved Kevin’s. 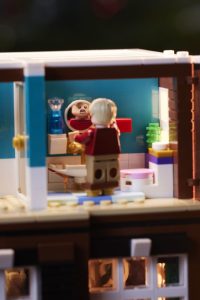 Get along to LEGO.com/HomeAlone to search for a hidden Kevin minifigure, find it, click on it and it’ll take you to a competition page.  There is also a Kevin minifigure hidden in selected LEGO stores, and if spotted, you can scan a QR code to enter the competition, bag a $1000 LEGO gift card and the Home Alone set – If you win. And, there are also life-sized statues of the Kevin McCallister minifigure installed near LEGO stores in cities around the world, including New York, Chicago, Paris, Brussels and Berlin. Each statue features a QR code, enabling different activities like games and selfies. 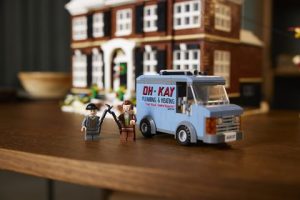 So many iconic moments, and scenes can be re-created in this set, and the LEGO Designers somehow managed to squeeze in nearly every single reference in the movie into the set.   The LEGO Ideas Home Alone set is available exclusively from www.lego.com/home-alone and LEGO Stores  from 1November, 2021, RRP £249.99.

Toyologist Pete Jenkinson regularly writes about toys in national newspapers like The Sun and The Mail. This super-dad has an unmatched passion and dedication for trying and testing the latest, coolest and most interesting offerings from the world of toys.
@toyologist
Previous Ultimate Hot Wheels
Next Halloween treats (no tricks)