Elect to get something extraordinary on your santa list

Peter Jenkinson November 21, 2018 Uncategorized Comments Off on Elect to get something extraordinary on your santa list

We’ve seen lists aplenty over the past weeks from the major retailers, toy multiples and more but for something a little different, a toy based gift or interactive book without any batteries have a look at what Whirligig have to offer. Based out of Brighton Whirligig has four outlets in the South East but furrow thy brows not Northern folk and those who don’t venture to the land of the jet stream, they sell online also. I was gifted a Romanian Flower Chime (pictured) for my birthday and it is a most shelf-worthy item that sits by the flat screen at home and now I’ve a smaller one which I set in motion when seeking inspiration at the office. 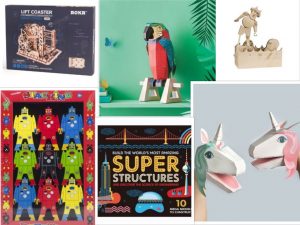 From all manner of Automata sets to creative books to make a giant Parrot on a Perch there is so much stuff on offer that you’ll likely not see anywhere else – and so your prospective recipient is much more likely to “ooh and ahh” than if gifted a more mainstream item. The outfit have just been given a gong by a group of MP’s, but let us not hold that against them as this was for being one of the UK’s top 25 best independent shops. So, pop along to one, the staff are encyclopedic in their toy knowledge, here’s the owners top ten Whirligig wonders :

Toyologist Pete Jenkinson regularly writes about toys in national newspapers like The Sun and The Mail. This super-dad has an unmatched passion and dedication for trying and testing the latest, coolest and most interesting offerings from the world of toys.
@toyologist
Previous Ralph returns to break the Internet
Next Talking Unicorn anyone?