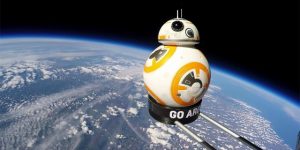 Argos sent a toy droid into space recently, footage has just been received at Toyology Towers and, yes, here it is. The point was to celebrate their new Last Jedi toy range so we’re scratching our heads as to why it wasn’t BB-9E that took the trip, but anyway.

The BB8 completed the mission in hours, reached a speed of over 200 miles per hour, got up to a gliding altitude of 37,260m above Earth – It took a team of 12 space experts an entire month to prepare the toy for lift off.

Overseen by Sent into Space squadron leader Dan Blaney, said: “Star Wars has always been at the forefront of bringing new galaxies and space travel to the masses. We we’re thrilled to have helped Argos send the iconic BB8 to return his secret data to the resistance, ahead of Star Wars™: The Last Jedi being released this year.”

Fess up then Dan, what information did BB-8 reveal?

Toyologist Pete Jenkinson regularly writes about toys in national newspapers like The Sun and The Mail. This super-dad has an unmatched passion and dedication for trying and testing the latest, coolest and most interesting offerings from the world of toys.
@toyologist
Previous They’re fruity, they’re loopy, they’re a Unicorn inspired breakfast cereal…
Next NERF finds another use for the recreational foam