NERF finds another use for the recreational foam

Peter Jenkinson September 26, 2017 Uncategorized Comments Off on NERF finds another use for the recreational foam 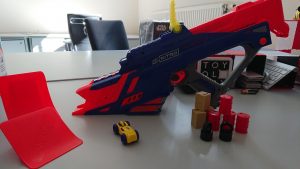 The latest arrival on the ever changing projectile scene from Hasbro’s crack NERF team is the Nitro range, as much a departure from the “normal” NERF dart as we’ve seen, RIVAL included. these ones aren’t designed to be taking potshots at people. Load up your NERF Nitro blaster and send cars flying fairly high, impressive lengths also were achieved with our MotorFury system, the battery assisted one in the range. Ours came complete with nine cars, each able to withstand short-pile carpet but performing outstandingly on wooden surfaces. There’s also nine stackable elements for you to aim and two ramps, one more vertical than the other. 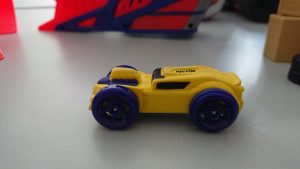 Each blaster has a safety switch that doesn’t allow the cars to exit without it being laid on a solid surface. So you’ll see that this range isn;t compatible with the other more active person to person target/torso play. The system does allow for some creative distance competition play, creating your own demolition ranges from LEGO and such, target practice with plastic cups or a Twister mat – The possibilities are many. For fifty quid this is definitely one toy that’ll earn its keep.

Toyologist Pete Jenkinson regularly writes about toys in national newspapers like The Sun and The Mail. This super-dad has an unmatched passion and dedication for trying and testing the latest, coolest and most interesting offerings from the world of toys.
@toyologist
Previous BB-8 sent into space BB-9E is gutted
Next X-rated for a reason – This laser battle kit is the dogs undercarriage