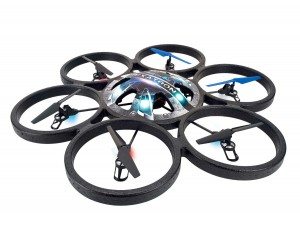 French outfit Parrot started out love affair with the Drone category at consumer level, their AR model has a number of variants now and the top end number has dual cameras (underneath and front facing) to capture video and still footage plus a GPS “back to home” function. All that operates via a smartphone and app with images beamed onto your screen, it is all rather brilliant. then DJI step in to the fray with their range supplied by Flying Gadgets here in the UK, they’ve multiple models in their quadcopter offering from basic four axis spinners to those with space for a GoPro and others with built-in filming capabilities and again, GPS functionality and *breathe* all manner of controls via an app on your smartphone/tablet – All very high tech, smart and swish. At the other end of the quadcopter scene a few folk have brought us micro RC drones, the Hubsan Q4 about the best and, for thirty quid not bad for some office based flying action but, there’s a gap, and we think the new Hexatron multicopter has stepped in to fill it. We want a powerful outdoor flyer that works with some wind, we want gyroscopic action for super stability, in fact we want six rotors and not the standard four, we want a machine than can perform mid-air 360 degree loops and really, we’re not that bothered about HD imaging or controlling with an app, an old school RC unit will do – This has it all, flies as well as its more expensive counterparts and, the drone fans we are sits perfectly alongside our fleet. Four speed settings too for more experienced flyers. Sub £110 including postage HERE

Toyologist Pete Jenkinson regularly writes about toys in national newspapers like The Sun and The Mail. This super-dad has an unmatched passion and dedication for trying and testing the latest, coolest and most interesting offerings from the world of toys.
@toyologist
Previous Toxic selection of dark and deadly scenarios anyone?
Next If your happy and you know it…..