Peter Jenkinson July 5, 2019 News, Uncategorized Comments Off on Water way to have a blast – soakers of all shapes and sizes 544 Views 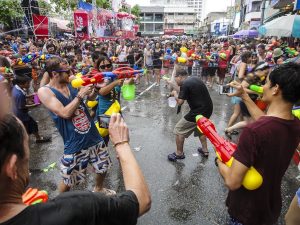 Take down a wave of enemies as they flee yelling H2-Noooooooo – If you’re in the market for a top water gun, take a peek at this haul of hardware:

Time is of the essence in a water-battle, if you’re out of H2O your opponents are at a huge advantage. This blaster allows a full tank refill in seconds. Immerse the entire blaster and you’re ammo is replenished and you’re back in the game.

Three bunches of water balloons included, each of which attached to the blaster and, when you draw water and blast they’ll fill up giving you loads of water grenades. Also acts as a regular water blaster.

Two modes for modes for unleashing H2O. Pump it up to fire a steady stream or, open the hatch and fling all the water in a single rage. Fill’s up in super-quick style too, a superb back-up blaster.

Two barrels means double the soakage, this blaster can unleash twin streams simultaneously and can hold an impressive amount of water – almost a litre.

Cannon blast your opponents from this intimidating piece of water warfare kit.  Pump the handle and marvel at the distance your deluge travels. A whopping two litre H20 tank on-board.

Show your very serious side with this giant blaster with 360º rotating tripod. Attached to the garden hose you’ve a constant stream of H20 – Watering the garden has never been so much fun.

Toyologist Pete Jenkinson regularly writes about toys in national newspapers like The Sun and The Mail. This super-dad has an unmatched passion and dedication for trying and testing the latest, coolest and most interesting offerings from the world of toys.
@toyologist
Previous Spider-Man Far From Home is having a very good week
Next Overwatch LEGO sets – near-future earth sets almost here