Peter Jenkinson May 25, 2016 Uncategorized Comments Off on Very BIG and very bouncy 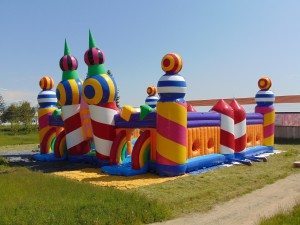 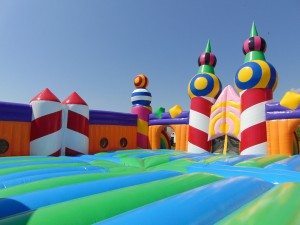 We’ve been lucky enough to experience the extra mile that the organisers of Camp Bestival go to in creating about the best family festival on planet Earth – Surpassed themselves this time they have. Together with Something Creatives they’ve only gone and actually built the words biggest bouncy castle, enough space for 100 bouncers, and in need of 1143 cubic metres of air. This blow up bastion has busted a 20 year old record with its dimensions – almost 24 metres long, over 20 metres wide and the highest wall standing at 12.8 metres.  The Camp, curated by Rob Da Bank, adds this accolade to their current roster of world’s largest fancy dress party, biggest busk ever and a massive, no, colossal on-site disco ball. For perspective purposes the side turrets are equal in height to the walls of Cardiff Castle, that’s taller than the Great Wall of China and about three times the size of the Berlin Wall. We are going to need a bigger garden.

Toyologist Pete Jenkinson regularly writes about toys in national newspapers like The Sun and The Mail. This super-dad has an unmatched passion and dedication for trying and testing the latest, coolest and most interesting offerings from the world of toys.
@toyologist
Previous Big Ben (and adjoining building) in Brick
Next You’ve been PomPom Wow(ed)