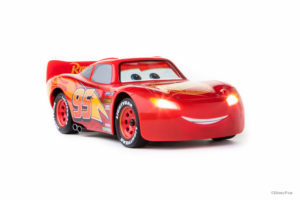 If you could reach into the screen and grab yourself a Lightning McQueen, yanking it from all its pixelated glory and having that comedic car come alive in front of your face in the physical –would you?

No need, Sphero have done it for you. Yes the robotic Bluetooth ball toting outfit from Boulder, Colorado really have bowled us over with this latest piece of kit – right in time for the Cars 3 film this summer.

It is worth noting that on top of the 80 odd engineers from Sphero that worked on this most lifelike of things, they had contact aplenty with Jay ward (creative director from Pixars Cars) and  Bobby Podesta (supervising animator on Cars 3) – both of whom we’re told were very passionate about getting this just right and ensuring the authenticity of the character was spot on.

The build contains over 450 parts, the paintjob was painstakingly put together to replicate the exact on-screen hues, the illustrations on the outside are NOT stickers. This machine has an ambient light sensor, Infra-red sensor, five touch-panels, three processors, head and tail lights, animatronic mouth and a custom built LCD windshield panel. This panel currently contains 150 animations but updates cometh of course as it is an app-powered ride.

Turn Lightning McQueen on and the motors inside enable this machine to shift upon its chassis in the same way as the on-screen character and this, with the mouth movement and LCD eyes is nothing less that enough to leave you open-mouthed.

The car drives around, is epic at making drifting moves with the specially formulated types, you can play games, you can program it to do a long (or short) series of speaking and movement sequences and unlock skills and new stuff as you play.

He also has watch with me mode and will react to the Cars film on your TV screen with commentary and such as you watch, clever stuff all round.

Sure its not an unconsidered purchase at £299.99 but if you’re looking for a tech toy that is truly innovative in a way that you have never seen anything the like of before then Ultimate Lightning McQueen ticks that box. 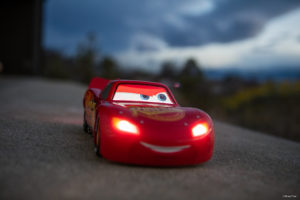 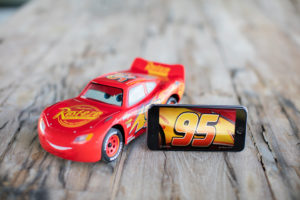 Toyologist Pete Jenkinson regularly writes about toys in national newspapers like The Sun and The Mail. This super-dad has an unmatched passion and dedication for trying and testing the latest, coolest and most interesting offerings from the world of toys.
@toyologist
Previous Rory’s cubes take on Kickstarter – the story telling dice play is almost past the post
Next Jacks back – Pirates of the Caribbean : Dead men tell no tales