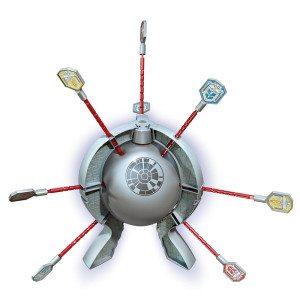 Paying homage to quite possibly one of the most iconic moments in cinematic history, The Trench Run, is Boom Boom Balloon The Death Star version. Those unfamiliar with the original you place an inflatable at the centre and, taking turns rolling the dice, clicking the blunted prongs into the sphere, until it can take it no longer and BOOM. Now this Death star version has a frame with some detailing and comes with a few printed balloons too yet it is the X-Wing fighters atop the attack modules that can, with a fair amount of imagination and repeating of appropriate phrases, put you right there as Red Leader. The resulting BOOM of the losing go is more of a bang, sorry BANG and is one of the finer conclusions to any party style game we’ve played.

Toyologist Pete Jenkinson regularly writes about toys in national newspapers like The Sun and The Mail. This super-dad has an unmatched passion and dedication for trying and testing the latest, coolest and most interesting offerings from the world of toys.
@toyologist
Previous Reigning Champion
Next Instant Magician “Just like that”