Peter Jenkinson May 10, 2017 Uncategorized Comments Off on Transformers toys rolling in 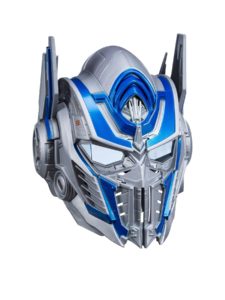 Fans of the franchise are in for a treat this summer as the latest instalment arrives on the big screen in June – Transformers, The Last Knight. Over the years there has been a decent offering of merchandise, in terms of the amount. In the early days a premium die-cast Optimus Prime and voice-changing mask were stand-out products but the range has been a little above average for the three films in-between but the game is back on it appears this time around, thanks Hasbro for this quite something Optimus Prime premier edition voice changer helmet, it is about the best character helmet we’ve allowed to ruffle our coiffured barnet.  Stick it on, its aimed at kids 6+ but fitted on the biggest head of the Toyology team, it has straps to secure it at the back and is open-backed and feels less claustrophobic than some of these masks. Three buttons to the side, one is for film phrases, another for sound FX and the last to turn your voice into an almost convincing version of the Transformers hero – Optimus Prime. When you’re not role-playing a Decepticons battle this piece of kit looks superb sat on display, the detail is outstanding, we use that word rarely. The downside is that you’ll struggle to transform Autobots back to their human guise. Yes it is pricey at a shade over £70 but it is a resplendent robot based plaything.

Toyologist Pete Jenkinson regularly writes about toys in national newspapers like The Sun and The Mail. This super-dad has an unmatched passion and dedication for trying and testing the latest, coolest and most interesting offerings from the world of toys.
@toyologist
Previous May the Fourth be with you – Star Wars Day is upon us
Next Ghostbusters and Playmobil are here to cross the beams