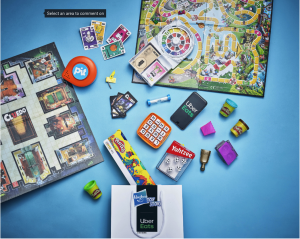 Uber Eats and Hasbro are launching a free toy store this week, it opens on the 17th and stays so until the 20th. There’s a poll, of course there is, some findings from it are almost three quarters (70%) of parents admit they are feeling overwhelmed as they juggle work and home-schooling, while 56% said they are concerned at the thought of spending a half term holiday with fewer activities to entertain children. Over half (60%) claim their kids are bored at home and 50% saying they’ve run out of things to do.

So, step up the virtual ‘Hasbro Toy Store’, stacked inside are seven of their  top toys and games and you pay for the delivery only, yup, get yourself to the Uber Eats app from Wednesday morning – delivered contact-free to your door in about half-an-hour.

With each order you’ll also receive an activity sheet as that there survey of their said parents wanted kids to spend more time away from their screens. In our opinion parents need to lead by example, they’re always screen-timing!

Anyways, the toys in The Hasbro Toy Store:

With almost three quarters of parents (71%) aiming to spend extra quality time with their kids this half-term holiday, one in five (20%) mums and dads admit to having spent less than an hour per week playing games together with their children since Christmas. The toy store will be open in London and Manchester from Wednesday 17th to Saturday 20th January.

“Being a parent is tougher than ever at the moment, so we wanted to do our bit to help bring families together and keep the children entertained while opportunities for days out are more limited. Uber Eats delivers items beyond food to help make people’s day-to-day lives that little bit easier”.

“Play is hugely important for children’s development, striking that vital balance between learning and fun. The half-term holidays are no different, so we want to make sure that children and parents get the break they desperately deserve during these difficult times. The games and activities in the Hasbro Toy Store are a great way of making sure families have a fun February half-term, whether they’re testing their wits with a game of Cluedo or getting creative with Play-Doh.”

Toyologist Pete Jenkinson regularly writes about toys in national newspapers like The Sun and The Mail. This super-dad has an unmatched passion and dedication for trying and testing the latest, coolest and most interesting offerings from the world of toys.
@toyologist
Previous Trending game tiles anyone?
Next Marble Mania