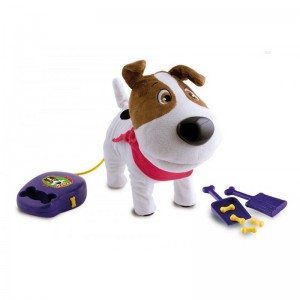 Now we don;t mind a few “parp” sounds, kids find it occasionally hilarious, as do grown-ups, the Fart Blaster from Despicable Me is rather a fun toy, Doggie Doo, the terrible plasticine pooping game was a top ten toy in 2013, the Barbie and her coco-pop in appearance pooping dog is a tad weird but this latest find has us scratching our heads. Seemingly trying to jump on a non-existent genre perhaps, the Cacamax (which doens;t take much translation) is a dog that’ll walk along on its lead controlled by you (okay not YOU but ONE) and you feed it mini plastic bones…..and, at will, the button on the lead reel is pressed and, following a “Prooot” (their words, not ours) sound it will hilariously release said fed bones from its backside. At £40 it’s no pocket money splash of the cash and with much smart toys in the FurReal range and the line of Teksta Robotic pets at/near the same price point this one looks like an expensive pile of ahem.

Toyologist Pete Jenkinson regularly writes about toys in national newspapers like The Sun and The Mail. This super-dad has an unmatched passion and dedication for trying and testing the latest, coolest and most interesting offerings from the world of toys.
@toyologist
Previous Top Gear twist on an old classic toy
Next Go absolutely bananas….