The toy industry’s ‘Robotic Buddy’ chapter is long and varied. From Tekska through Furby and all the way to 2017’s Cozmo there has been a focus on interactivity, games and forming ‘real’ personal bonds.  This year marks the next stage in that story with Spinmaster’s Boxer rolling to the forefront. 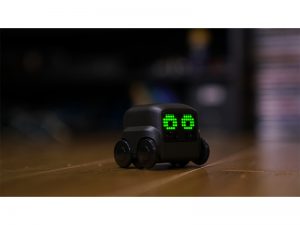 At first glance Boxer comes across as a simpler, humbler Cozmo. Where Anki’s £200 companion sports tank-style treds, Boxer makes do with four wheels; and with the former boasting a set of powerful lifting limbs, the armless newbie could make for a lacklustre first impression.  Boxer also trails behind Cozmo in the tech area. He lacks face and voice recognition and his inbuilt games are nowhere near as complex as  Cozmo’s block-based stacking fun but I have to say, this is where the negatives end. 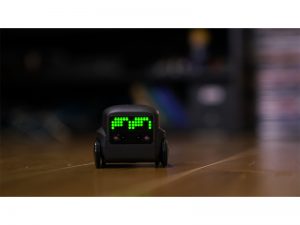 Straight out of the packaging, Boxer is a delight. From the moment you activate him, you’ll have him scooting round your house warbling to himself via his very loud speaker and exploring his new home with the inbuilt I.R and touch sensors. His interactivity becomes immediately apparent, run your hand in front and he’ll chase you. Give him a pat from behind and he’ll pop a wheelie in surprise. I had a big grin on my face the instant I switched Boxer on.

His LED ‘face’ portrays a good amount of emotions, he’ll ‘smize’ (smile with his eyes) when feeling joyous and he’ll throw a mean frown when tipped upside down. 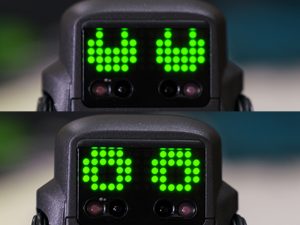 Boxer also come packaged with a fair few accessories. A remote control for when you want to take the wheel, a ball that Boxer follows and ‘kicks’ (read ‘slams his face against’) and a set of cards which are, funnily enough, the Ace up his sleeve (If he had sleeves). 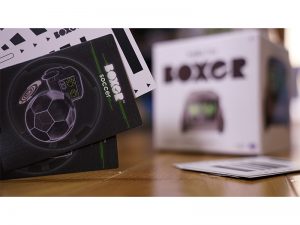 Placing one of the ten cards in front of Boxer prompts him to scan it. This then activates one of ten game modes. These vary from ‘Soccer ‘ where Boxer will show off his football moves with his ball, to DJ mode which turns the cute-cuboid into a mixing desk with each of his sensors warping the music. These ‘Activity Cards’  are a brilliant addition and are so easy to use making Boxer far more than a One-Trick Pony. 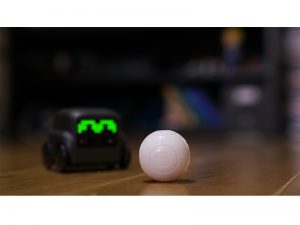 Even after all the fun I’ve been having with Boxer the most impressive aspect of the package is still the boring bit. The price. Boxer retails at £80. £80! A cool £120 cheaper than the afore mentioned Cozmo and he just doesn’t feel like an inferior product. Spinmaster have been clever with their development. They’ve focused on the features that really matter, refrained from over-designing and the result is fantastic value for money for the customer. In a world of hyper expensive tech toys, Boxer is a breath of fresh air and one you should take before the cold chill of the wallet-busting festive season begins! 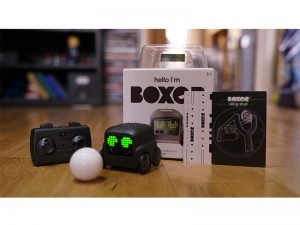 This actor & presenter is a proud Midlands lad who fled to London over a decade ago. Having grown up on a healthy diet of Power Rangers, Transformers and Thundercats, Rob is a sucker for anything that goes 'pow!' And 'Zap!' A film producer and radio savvy man this Toyminator really knows his R/C's from his elbow.
@@rtaylorhastings
Previous Winter is coming! The Top Toys for Christmas lists have begun!
Next Hamleys and the rise of ‘The Imperfects’

Have you ever wanted to build your own genocidal maniac?  Well, with Wave 1 of …