Here is Spiderman straight out of a comic book

Peter Jenkinson June 15, 2017 Uncategorized Comments Off on Here is Spiderman straight out of a comic book 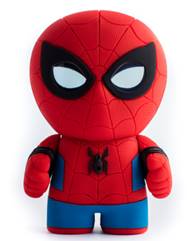 Take your place in the Marvel Universe with the web-slinging superhero, bringing toys-to-life like never before. Your verbal interaction, along with the app, brings Spidey to life offering hours (and hours) of entertainment. Take part in interactive missions against notorious villains, each and every decision you make affects the next direction so your unique journey will continually evolve. Spidey has Wi-Fi inside and so allows for new missions to be downloaded from Sphero HQ as they’re created – new missions, villains, and other auto updates. You could just hang out and have a banter with your plastic hero, play games, listen to his jokes( or groan), his voice-control software was created by the team behind Amazons Alexa. Adding to the “to-life” status are his fully animated LCD eyes and motion detection. Marvel at his reactions to passers-by, set him up to wake you, set him into room guard mode or shake him (for a minute or so) and you can cause him to chunder/throw-up in quite an expressive form – totally clean, just a tad gross. He is a chatty and enthusiastic about everything type of chap, a toy that is totally tactile and a plaything that looks the part even when the power is off. RRP £149

Toyologist Pete Jenkinson regularly writes about toys in national newspapers like The Sun and The Mail. This super-dad has an unmatched passion and dedication for trying and testing the latest, coolest and most interesting offerings from the world of toys.
@toyologist
Previous Toys to life gets some defibrillation from Ubisoft at E3
Next With just 186 days to go Christmas crackers are revealed