Some of the best board games we’ve played in 2019 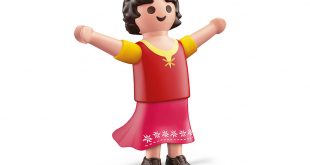 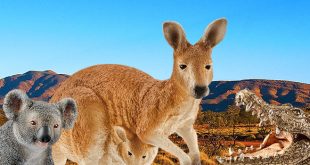 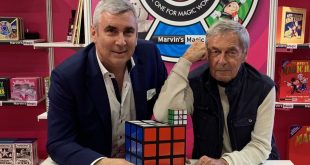 Rubik’s gets the magic touch

Another stonking year for the board and party game market, a raft of new titles, the emergence of new categories, sales still on the increase and the promise of even more gaming goodness in 2020 – For now here are some of our favourite (not-too-intense) lighter weight games for some Boxing Day boredom busting: 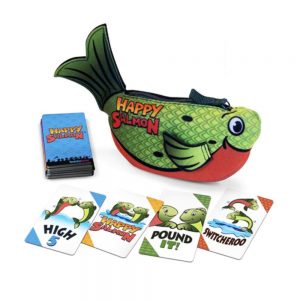 Inside the belly of the fish are four different types of actions cards, split the pack between all of the players and stand in a circle. Everyone turns their top card and you have to match the illustrated action with another players card, each person performs it and then throw that card on the floor and turn the next over – first to get rid of their cards wins.

Its fast-paced fun for everyone, even those just watching on as everyone is shouting and moving around. Kids loving playing with their friends and it’s a superb post-pub-party play too, all in a splendid salmon shaped carrycase – Who wouldn’t want one of those? 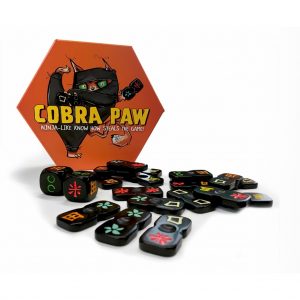 Tip the playing tiles out, ensure they’re all face up with the two symbols displayed – ready? Then roll the pair of dice to reveal two symbols which match a tile in-play – grab it first and claim that piece. Keep playing, first to collect six of these so-called Claw Fuku stones wins. Beware however, if the symbols match a tile already claimed by another player they have to defence it with their hand before an opponent grabs it.

This is a super simple game, really well made and appealing to all ages. We discarded our box and set the play pieces into a bag as it was too bulky. Plays in 5-10 minutes maximum. 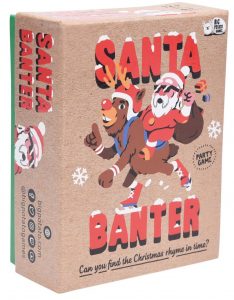 Get your Christmas jumper on and prepare for some rhyming fun with this seasonal special. Split into two teams, ensure a good mix of ages in each. Pick up a card and you’ll find three Christmas rhymes on the back.  It’s time to try and get your team to guess them all in 30 seconds. The game is split into three rounds – describe rhymes without using any key words, round two is the riddle round and finally it’s time to mime.

Some of the rhymes are tricky so it’s a good plan to mix up the ages in your groups, it’s about a 20-minute game so a perfect filler for the gap between Christmas pudding and the Queens speech. 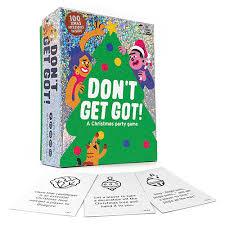 Play this after Santa has made his decisions on naughty/nice lists as it is a bit mischievous. The game is all about getting sneaky missions done, tricking others woihout getting caught. Could you get an Uncle to say “Chrissle-mizzle”, or your grandma to sing ‘Jingle Bells’? tricking players without getting caught. It’s not a game, you just play it throughout the day with each player starting with six missions The first to finish three wins.

Certainly one for the teenagers to get on with and perhaps any kidults you have around the house too. Quirky bit of fun. 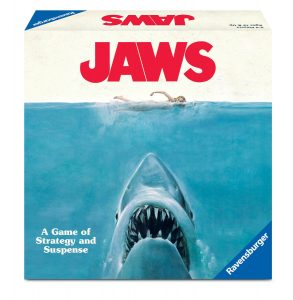 This is a two-phase game based on the 70s flick, one player takes the role of the killer shark while the rest hunt it playing Brody, Hooper and Quint. The shark is terrorising swimmers along Amity Island while trying to stay out of your sight. The next part the shark-seekers are on the Orca hunting Jaws, get attacked enough and, keep it at bay and you’re not going to need a bigger boat.

The artwork on the box makes you want to reach for it all the time, stick on the sound track whilst you play for that added suspense. Not too complex to play but aimed at a crowd who’ve seen this cult classic. 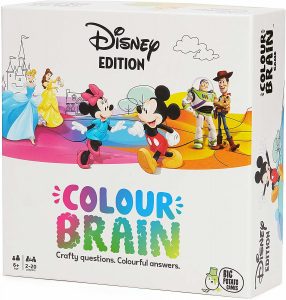 You’ll definitely need the ankle-biters around to help you win at this game. The contents cover all the Disney animations and you’re given the answers at the beginning in the form of 11 coloured cards. Each round a question such as Docs beard from Snow White or Bo Peeps dress in toy story is asked and you draw one or more of your coloured cards to answer. Some truly abstract ones are inside which usually takes the recall of a pre-teen, so get one or two on your team.

Easy enough to pick up and play, lots of head-slapping moments as you realise you do remember the three colours of Olaf in Frozen. A real family treat. 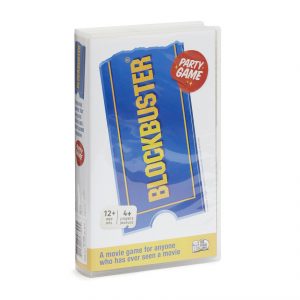 With 200 film cards covering eight categories, your team must collect one from each to be victorious in this game celebrating the golden age of VHS. From naming more films with dogs in that your opponent to acting out a scene from Snow White each team will need a wide range of skills.

This game has real family appeal, there are so many film titles I’d forgotten about which prompted a few days of catching up on some classics. It’s one of those games that gets people both playing and having a chat. 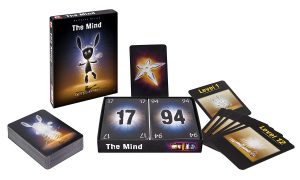 The deck contains cards numbered 1 to 100 and are dealt to players in increasing amounts after each round. First turn each player gets two cards each, the object of the game is to lay down your cards in ascending order but without saying a word to the other player. It’s all about reading body language and the inevitable grins and you’ll miss out occasionally – It gets steadily more intense and trickier as rounds progress and more cards are dealt.

One of the games that I carry everywhere, even the non-gaming people in my life enjoy a few rounds of The Mind – So easy to play, so very difficult to get to round ten. 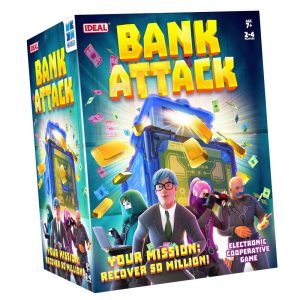 This is a collaborative safe-cracking game for two to four players, each one tasked with a role to play in breaking into the vault and releasing the loot inside. Lasting around five minutes this electronic game offers a series of increasingly rapid instructions to each player and you’ll need to keep the pace to grab that stash. Stay alert at all times as the next instruction could be yours, get something wrong and the alarm is raised and game over.

Ideal for a quick gaming hit, there are varying levels of difficulty you can set at the start – A great for all ages game where you’ll feel the tension rising and cheer when your break-in is successful. 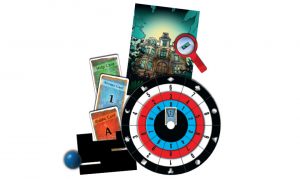 The latest release in a growing category in the board gaming sector is this escape room in a box style puzzle from the people who make them best. Up to four players work together to solve a series of riddles presented into the box to unlock sequences with correct answers that allow you to progress and, eventually escape the house.

This title is at the lower end of the complexity level, but you can get much tougher one, all are played against the clock, so you’ll feel the tension rising. 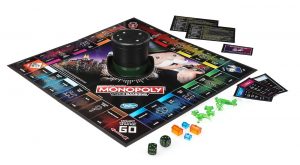 Every year there are new versions of the property trading game, this one, which does away with the banker, a contentious role, so is well worth a mention.  So, with no-one being accused of nicking money from the pot you can just concentrate on playing.  The Mr Monopoly speaking hat tracks all your movements and purchases as you build your empire.

Time to ditch your dog-eared copy of the classic and upgrade to this version. There isn’t any guarantee that someone won’t still flip the board just for nostalgias sake. Kids play this one together brilliantly. 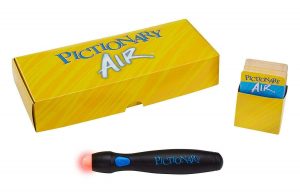 The firm family favourite where you push your questionable artistic skills to the limit with pen and paper gets an app update with this new AIR version. Connect it over Bluetooth to your smart devices and as you wave your wand in the shape of the object you are attempting to explain to the other players, the scrawl appears on-screen. A tad trickier than the old school version at first but it’s hard to beat for belly laughs.

Younger players will really enjoy the app part of this play, the classic version wins for me, but this is a great attempt to offer a new way to play.

After selling millions of copies across the globe this train-based board game has now added Alexa skills to enhance your train shunting skills. By drawing cards in sequence you’ll try and create routes across Europe for your own railway network. It involves just enough strategy not to make it frustrating and now with Alexa skills you can learn the rules in minutes and even use your Amazon device as another player.

There are quite a few pieces to keep together so put away properly. The game takes a bit to explain to your players say eight and above but once they’re in it is a go-to game for everyone. 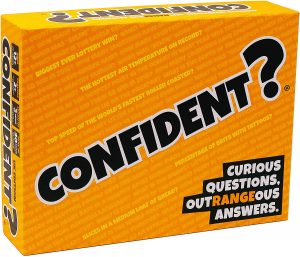 A great new quiz game where everyone has a chance even without University Challenge level knowledge. There are a series of question cards ranging from the expected “How many countries does the Equator pass through?” to the more obscure “Percentage of Brits with tattoos?” You then decide what the range might be and, the person with the smallest range of numbers on their board in which the correct answer falls is the winner.

Adding to the play are chances to double, swap or copy answers adding just enough jeopardy – Superb for gathering random knowledge and no waiting about for your turn. 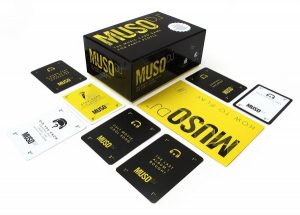 Play as the DJ together alongside your music streaming app, fire up your Spotify, Apple music, Deezer, Amazon music or YouTube collection and others guess the artist, track and what type of playlist you’re creating to score. Everyone plays at the same time and, better still, you’ll all get the chance to spin your virtual turntables.

Gets people chatting about each other’s questionable tastes in music, and, with 250 question cards and access to millions of tracks no two games could be the same. Ideal for millennials, not so much if you only enjoy Justin Bieber. 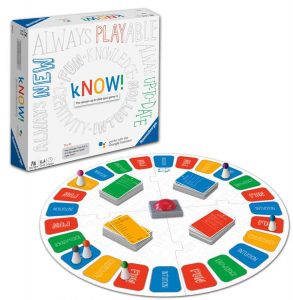 Plenty of quiz games can get repetitive if you play them enough but a game that plays along with Google Assistant, so the questions are a little more interesting and entertaining. From asking you to name an animal sound, the temperature in Barcelona to how many days until Christmas or the number of Midsomer Murder episodes there are 1,500 included questions that’ll always be updated.

Discard your scepticism about having Google run your board gaming, I started out that way and have enjoyed the variety of questions. Good family play, pick up some nuggets of useless knowledge along the way.

Toyologist Pete Jenkinson regularly writes about toys in national newspapers like The Sun and The Mail. This super-dad has an unmatched passion and dedication for trying and testing the latest, coolest and most interesting offerings from the world of toys.
@toyologist
Previous 2019: The year’s top bits in LEGO bricks
Next CES 2020 Kids at Play Awards Top 10 Winners Announced 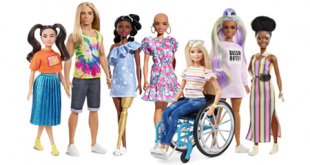