Peter Jenkinson May 20, 2017 Uncategorized Comments Off on Rory’s cubes take on Kickstarter – the story telling dice play is almost past the post 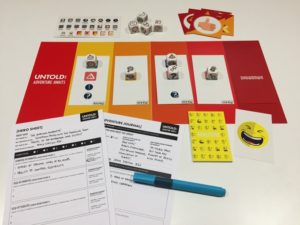 Since 2008 we’ve been fans of the storytelling cubes, enjoyed watching small minds explore storytelling with the aid of these superb sets. More recently The Creativity Hub moved into licensing, Moomins, Batman and Dr Who amongst some fine cube sets to set minds on weird and wonderful tale telling adventures. Their crowdfunding effort is for a new way to play, Untold : Adventures Await, described as a way of throwing yourself and fellow players into a TV show, but rather than passively watching you are caught up in every scene and making decision as to where the  plot takes you. Each game takes around an hour to play and we’re excited because literally anything could happen as you play. Just this and a set of nine StoryCubes of your choice and you are away into a land of imagination. The design has ben done by John Fiore (The 9Qs, World vs Hero) and Rory O’Connor (Rory’s Story Cubes) and is aimed at one to four players. Just a few decisions at the beginning of the game storylines emerge and draw players in and sends them through the gameplay towards an exciting finish. We’re sold. You can watch the video for more info and back it HERE

Toyologist Pete Jenkinson regularly writes about toys in national newspapers like The Sun and The Mail. This super-dad has an unmatched passion and dedication for trying and testing the latest, coolest and most interesting offerings from the world of toys.
@toyologist
Previous Ghostbusters and Playmobil are here to cross the beams
Next Ultimate Lightning McQueen revealed – scaled automotive excellence arrives ahead of Cars 3