Retailer unveils their predictions for top sellers of 2019

Peter Jenkinson June 11, 2019 Uncategorized Comments Off on Retailer unveils their predictions for top sellers of 2019 31,560 Views 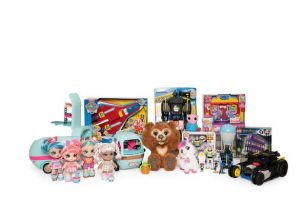 There are less than 200 days left until Santa does his rounds but the top toy bods at Argos have released their predictions of what’s most likely to be on those lists this Yule. This list of 12 toys comes alongside some research from the retailer that a quarter of Brits have already started their Christmas shopping with just under ten per cent who have even finished their festive gift buying. You can see these people from a distance, ultra-smug looking, we at Toyology Towers love nothing more than a mad xmas-eve rush for an emergency gift*
This year’s top toy list takes some inspiration from some of the biggest TV, film and video gaming franchises with almost one in five (17 per cent) of Brits look to the big and small screen for their main Christmas present inspiration, this number rises to a third (28 per cent) for those with children aged five to nine.
And here they are this year’s top 12 toys as selected by the globe-trotting team at Argos:

The Argos research reveals that a third of us (32 per cent) expect to spend more on gifts this year. Parents are set to spend an average of £273 on presents for their children – dads averaging £295 and mums £258. With the data showing parents are set to purchase seven gifts for children, the top toys makes the perfect shopping list.

Juliet Ward, Head of Toy Buying at Argos, said: “Digital entertainment is influencing play more than ever before with popular franchises inspiring toys like the Fisher Price Imaginext Transforming Batmobile and 7” Real Walking Buzz. It’s really exciting to see online video gaming entering the toybox with the Fortnite Battle Bus allowing children to recreate what they see on screen in real-life at home.

“It’s no secret that children love animals and so they continue to heavily influence toy innovations, such as the Cubby Bear and Owleez. And kids and big kids alike won’t be able to resist the delightful Boppi – the world’s first booty shakin’ llama. There are also some really quirky innovations on the list this year, such as the collectable Blume Dolls, which magically sprout out of their flower pots when sprinkled with water.”

I think this year’s top toys list is a great representation of the entire toy market; there’s something that will appeal to every child and of all ages. From the quirky to the interactive, toys which encourage role-play to those designed for pure excitement and entertainment. All 12 toys are deserving of their spot – I’m struggling to find a favourite.

Toyologist Pete Jenkinson regularly writes about toys in national newspapers like The Sun and The Mail. This super-dad has an unmatched passion and dedication for trying and testing the latest, coolest and most interesting offerings from the world of toys.
@toyologist
Previous Celebrate 35 years of Ghostbusting with these new PLAYMOBILsets!
Next Outdoor Toy Awards 2019 – and the winner(s) is…..