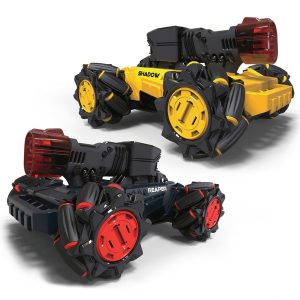 We’ve seen cars equipped with lasers before but they were APP controlled and left us a bit, well very, disappointed. A proper R/C unit has to have a dedicated controlled, in our humble opinion, this latest set-up from character has just that. May we introduce you to Shadow and Reaper. Really quite decent manoeuvrability give you forward, reverse, spin and turn’s at decent speed with some drift action that’ll impress. Anyhow, they’re more than just R/C’s, they offer two modes of play – Combat where you use the built-in infrared cannon to hit the other car in the backside three times to disable it (recoil upon a hit and explosion on a win). This range offers eight channels so you can, funds allowing, battle eight cars in a sitting. 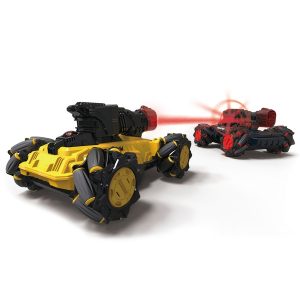 The other option is single/autonomous mode which makes one Laser Battle Hunter a moving target for a minute. Aim and  blast at the other car as much as you can in 60 seconds, when the time is up your opponent bleeps out the number of hits it took on. All out these aren’t bad at all, couple of cars for sixty quid, just don’t scrimp on your AA batteries, they each need SEVEN and you know that copper tops are the only option.

Enjoy, Argos have some…. (cars and batteries). 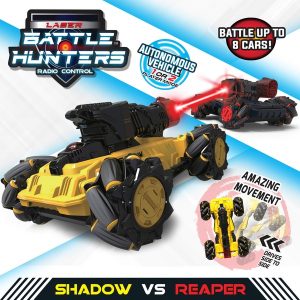 Toyologist Pete Jenkinson regularly writes about toys in national newspapers like The Sun and The Mail. This super-dad has an unmatched passion and dedication for trying and testing the latest, coolest and most interesting offerings from the world of toys.
@toyologist
Previous Monkey business
Next Robotic balloon dog is in the top ten toys of 2020 that you’ve not read yet….