Peter Jenkinson February 18, 2014 News Comments Off on Real FX Racing tipped to be a top toy of 2014 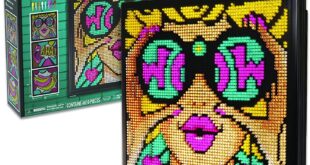 Real FX Racing has been identified by USA Today as one of the potential top toys of 2014.

The Fox News show named only five toys it thought would be a hit this year, and the RC racer from British company Wow! Stuff was included.

The racing set, which promises ‘the rich content of video game racing, but in real life’ has been on show at the New York Toy Fair this week.

So what makes Real FX Racing so great? On the surface, it looks quite similar to a slot-racing set like Scalextric. However when you look a little closer, you’ll notice there are no slots or any physical boundaries on the track.

So do players need to be super skilled in the arts of RC to stay on course? Not really, as Real FX Racing has artificial intelligence assisted controls to help prevent cars from flying into your living room furniture.

The AI also means single players can race against a computer controlled opponent.

Other features include controllers which emit sound effects and a 2.5 metre race circuit which is much easier to set up than other toy tracks, providing nearly instant gameplay.

Wow Stuff – the same company which bought you toys like Attacknids and MyKeepon – says it spent 7 years making Real FX racing. Could it be one of the best toys to come out this year?

Toyologist Pete Jenkinson regularly writes about toys in national newspapers like The Sun and The Mail. This super-dad has an unmatched passion and dedication for trying and testing the latest, coolest and most interesting offerings from the world of toys.
@toyologist
Previous Marble Racer is ‘fastest marble game yet’
Next ‘Tech-hanced’ features bring Marvel Morphsuits to life