Peter Jenkinson May 5, 2020 News Comments Off on Play your cards right with these new Top Trump packs 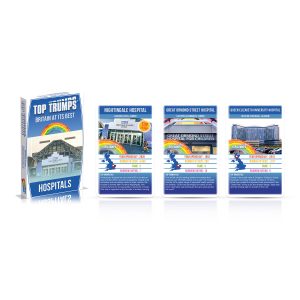 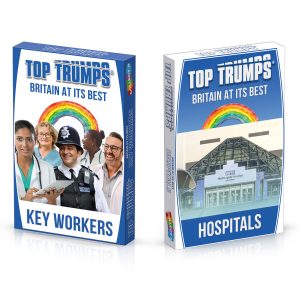 Lauding and applauding key and essential workers from doctors and nurses to less high-profile professions such as pest controllers, midwives and sea merchants even politicians, who are depicted on the Top Trumps card by Boris Johnson we’ll forgive and there’s a nod to journalists too.

One of the four scoring sections in the new game is ‘Unsung Heroes’ .. and in that category it is the partners of key workers who come out top. They get a maximum 10 out of 10. Binmen and binwomen scored a point lower at nine out of ten. Less unsung heroes like doctors (8), nurses (8) and police (7) fare lower.

Claire Simon, from Top Trumps, says: “Every single front-line key worker is, of course, a heroine and hero and would each score 10 (or even 11) out of 10 by any reckoning if we had devised a Hero category. By creating an Unsung Heroes category we have ensured varying marks, in keeping with the game’s core classic and its unique and much-loved branding. From our research, which has been intensively conducted over six weeks, partners of key workers came out top in this section. There are an estimated one and a half million partners of key workers in Britain so that’s a lot of Unsung Heroes and Heroines.

Many of the public we spoke to pointed out that partners too are putting their lives on the line, albeit less directly. As well as being there physically they are providing emotional support. For that reason we listed partners as key workers.”

Other features of the pack include:

Toyologist Pete Jenkinson regularly writes about toys in national newspapers like The Sun and The Mail. This super-dad has an unmatched passion and dedication for trying and testing the latest, coolest and most interesting offerings from the world of toys.
@toyologist
Previous LEGO and Universal embrace the power of music
Next We’re all playing more now – indoors and out