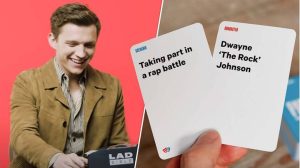 For those out there looking for fame, First Impressions features a QR code on the box that links directly to a submissions page for a chance to be featured on LADbible.

Arian Kalantari, Co-Founder of LADbible Group, says, “LADbible has established itself as the ultimate destination for entertainment, so we are so excited to be able to give people the chance to enjoy a new kind of fun in their homes with First Impressions. Often, it’s hard to find a card game that caters for the whole family but there is a character for everyone!”

First Impressions is available to purchase from ladstore.com for £24.99.

Toyologist Pete Jenkinson regularly writes about toys in national newspapers like The Sun and The Mail. This super-dad has an unmatched passion and dedication for trying and testing the latest, coolest and most interesting offerings from the world of toys.
@toyologist
Previous Happy Two’s day
Next Sonic 2 arrives on the big screen – celebrate in bricks