What’s that coming over the hill, is it a monster? Well- yes, The Monster actually! It’s big, it’s bouncy and it’s full of NERF blasters! Hasbro has created a touring, immersive, inflatable assault course and Birmingham is its first target. 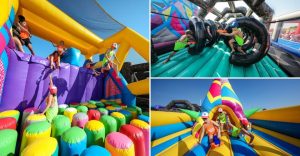 Once August 16th rolls around, guests at the NEC will have 4 days to bounce and blast their way around The Monster before it sets off to London’s Alexandra Palace. If blasting and bouncing isn’t your speed, guests will also be able to try out all of NERFs sports products such as their Vortex Footballs and Basketball sets. There will even be a giant screen showing shots from action cams positioned all around the event. So, even if you’d rather have a nice sit down, you can go along and watch your nearest and dearest take part in the squishiest of wars. 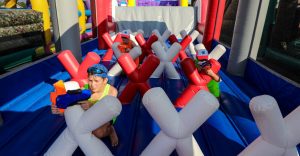 What on earth is all this bouncy fun in aid of? Well, its NERFs 50th anniversary! Can you believe that kids have been blasting and launching and chucking and splashing and flinging for half a century?

This actor & presenter is a proud Midlands lad who fled to London over a decade ago. Having grown up on a healthy diet of Power Rangers, Transformers and Thundercats, Rob is a sucker for anything that goes 'pow!' And 'Zap!' A film producer and radio savvy man this Toyminator really knows his R/C's from his elbow.
@@rtaylorhastings
Previous Beast Morphers action figures pack a punch!
Next Spinmaster’s smashing new collectable line hatches! – There be Dragons in the USA!