My Little Pony – see the film buy the stuff

Peter Jenkinson October 19, 2017 Uncategorized Comments Off on My Little Pony – see the film buy the stuff

And so it is the kids break up for half-term, well they’ve been working five days a week for like six hours a day for, well, six weeks or so, they must be shattered. So, any plans for entertaining the junior troops as yet anyone? Holidays to far-flung destinations, caravan trip closer to home perhaps? Nothing on the books as yet eh….ok, fear now, My Little Pony The Movie is out – That’s one rainy afternoon sorted. There is a decent list of talent voicing over the characters in the film, lots of high pitched ones thankfully interspersed with booming evil overlord style ones to ease the impact on your eardrums. Now I’m no Brony but really don’t mind A Little Pony or two and I have a particular penchant for all things Unicorn and so the toy range from Hasbro certainly has my attention, these two pieces in particular.

My Little Pony: My Magical Princess Twilight Sparkle
Twilight Sparkle, what a name, the pony with Pegasus wings and a responsive unicorn horn. Her head and hoof can move, she can say 90 plus phrases, light up horn and look pretty good when switched off. That star button on her hoof releases friendship advice, stories, spells and songs – £119.99 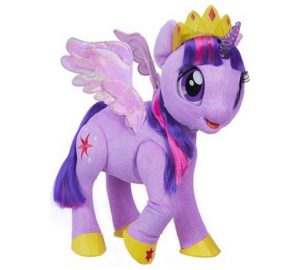 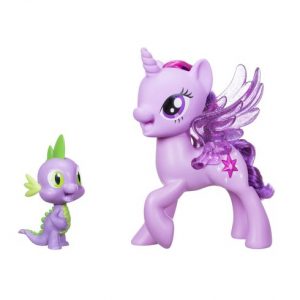 Toyologist Pete Jenkinson regularly writes about toys in national newspapers like The Sun and The Mail. This super-dad has an unmatched passion and dedication for trying and testing the latest, coolest and most interesting offerings from the world of toys.
@toyologist
Previous Revolutionise your brick based play with Mayka Tape
Next Women of NASA celebrated in brick