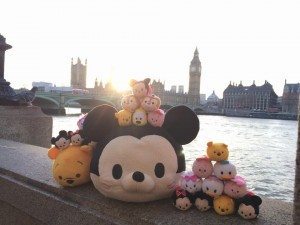 We received a press release last week which left us a bit bemused, it told us of a new craze that had arrived in the UK and was about to rival the lofty successes previously achieved by Pokemon and Beanie Babies. “An invasion of Britain”, “millions sold in Japan and the US”, “a craze to rival Tamagotchi, Bey Blades and Cabbage Patch dolls” – adding further to claims of world dominance. So here are Tsum Tsums (pronounced tsoom tsoom’) translated from the Japanese meaning stack stack. These collectables of varying sizes let kids pile them atop each other, aww cute. Pester Power we’re told is about to escalate to Beanie Baby phenomenon levels – That was a press release that left us a little out of breath, comparing your newly launched product to one major craze  in history is optimistic, liking it to the five best known ones in the past three decades is quite another. They have done rather well in the US and Japan, there is also a supporting game where you match the characters on-screen, and it seemed to go down well with our Toyminators (aged 5/7) – 14 million downloads and counting. If the hype we’ve read can achieve 10% reality then everyone should make a few quid, well, apart from us parents who should be getting ready to be pestered like never before.

Toyologist Pete Jenkinson regularly writes about toys in national newspapers like The Sun and The Mail. This super-dad has an unmatched passion and dedication for trying and testing the latest, coolest and most interesting offerings from the world of toys.
@toyologist
Previous I want to ride my…..
Next The Fairies are revolting