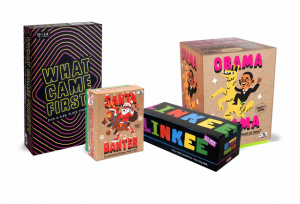 Shouty-outy games are our favourite, especially when infused with some Xmas (spirits). Linkee, What Came First and Obama Llama (and its Christmas sister game Santa Banter)can now be played as voice activated games or ‘skills’ on Alexa devices.

The games are all simple to play, interactive, hands-free and you’ll have Alexa talking you through the rules. They’re free, at first, then you can buy some more content or the full board game without leaving the skill.

The super-simple, shout-out-the-link trivia game. Alexa gives you four questions (plus a clue if you need it) and have to work out what links the four answers. If the answers were John, Paul, George and Ringo, the link would be… The Beatles. Shout “Linkee!” after any question to guess the link and gain points that will see you rise up the national leader board. There’s a free ‘Linkee of the Day’ every day or you can join the Linkee Fan Club and play unlimited Linkees and really climb the leaderboard.

Donald Trump or Fake Tan…? What Came First is a super-simple trivia game where Alexa gives you two things and you have to say which of them are the oldest. Get it right and you get a shot at guessing the year it came into the world for extra kudos. Play for free up to 20 times with the option to unlock extra question packs.

Donald Trump came first! The ‘Orange One’ was born in 1946 while fake tan as a product was launched in the late 50s under the name ‘Man Tan’.

The ridiculous rhyming game with the weird name that was invented by radio DJ and broadcaster Matt Edmondson. Alexa will give you a silly celebrity riddle and you have to shout out the rhyming answer.  For example ‘Mission Impossible star has got bleeding under his skin.’ Solve 20 rhyming riddles for free with as many guesses as you like. If you love the game you can purchase the full board game from Amazon using just your voice.

The answer is ‘Tom Cruise has a bruise!’

Another of Matt Edmondson’s games, Santa Banter contains ridiculous rhymes just like Obama Llama, but they’re all Christmas themed. For example “Will Ferrell’s character in Elf is covered head to toe in dirt.” Play 10 questions for free then choose to unlock the Santa Banter Question Stocking to get 50 extra questions.

The answer is ‘Buddy is muddy!’

Toyologist Pete Jenkinson regularly writes about toys in national newspapers like The Sun and The Mail. This super-dad has an unmatched passion and dedication for trying and testing the latest, coolest and most interesting offerings from the world of toys.
@toyologist
Previous Added magic from Argos
Next Sleigh loads of Tier whatever you’re in fun with these Xmas themed plays