LEGO launches Apollo 11 Saturn V model and it is B.I.G.

Peter Jenkinson May 1, 2017 Uncategorized Comments Off on LEGO launches Apollo 11 Saturn V model and it is B.I.G. 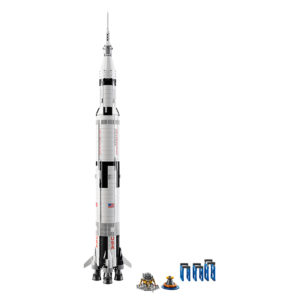 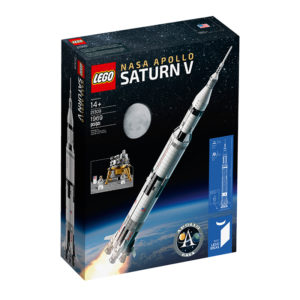 It was a few years back that Felix Stiessen and Valerie Roche put their Saturn V rocket on the LEGO Ideas and a year later in 2015 it achieved the 10,00 votes needed to move into formal consideration. Then, in 2016 LEGO gave it the thumbs up, made their own commercial adjustments to the build and it’ll be available in June.  The price to own a Danish brick based iconic piece of space history will be about £120 and your final build will stand at a drool-worthy metre high. The total piece in the build is an impressive 1,969 – the Year that Apollo 11 landed on the moon. The detail on this model is superb, the rockets assembles in stages ( and there are stands should you wish to display each one separately. The first section contains the five huge F-1 engines, the second five J-2 engines and the third a single J2.

There’s a stunning amount of detail in the set. The rocket assembles in stages, just like the real thing did. The first contains the five massive F-1 engines, the second five J-2 engines, and the third a single J-2. Inside the upper rocket stage are shrunken versions of the Apollo Lunar Lander and part of the Command/Service Module that got the astronauts off the surface of the moon and back home. The two microfigures we’ve struggled to distinguish so are naming them Neil Armstrong and Buzz Aldrin. This set is the best homage to this incredible feat that it possibly could be. 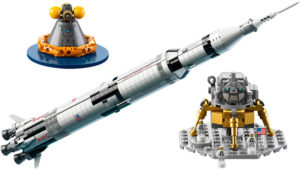 Toyologist Pete Jenkinson regularly writes about toys in national newspapers like The Sun and The Mail. This super-dad has an unmatched passion and dedication for trying and testing the latest, coolest and most interesting offerings from the world of toys.
@toyologist
Previous Forza taps into nostalgic thrills
Next May the Fourth be with you – Star Wars Day is upon us