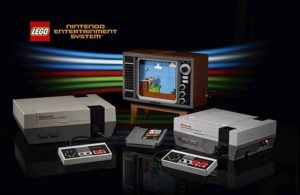 Touted already by some as one of the best LEGO sets ever, this collaboration between the Danish brick building outfit and Nintendo has plenty of people shouting loudly. Carrying on from the interactive Super Mario sets launched last month this mechanical Super Mario Bros. set pays homage to the 35th anniversary of the NES creating video gaming history. Complete with 1980’s style TV set and a decently detailed console this finished piece offers a mechanical homage to the on-screen gameplay. A flat eight-bit micro Mario runs along the revolving LEGO screen jumping and avoiding obstacles as you go, you can also scan in your Mario from the Super Mario starter course and he’ll sit atop the screen reacting on all the action.

“Super Mario has been a cherished figure in the gaming world for over thirty years now,” said Maarten Simons, Creative Lead on LEGO Nintendo Entertainment System™, the LEGO Group. “Many adults still fondly remember that first time they saw Mario leap across the small screen, even if the graphics were a lot simpler than they are today. With the LEGO Nintendo Entertainment System, we’re letting them truly indulge in that nostalgia, recreating one of the most-loved consoles of all time so they can see the Super Mario from their childhoods once again – and even to share the experience of gaming in the 1980s with their own children.”

Toyologist Pete Jenkinson regularly writes about toys in national newspapers like The Sun and The Mail. This super-dad has an unmatched passion and dedication for trying and testing the latest, coolest and most interesting offerings from the world of toys.
@toyologist
Previous Rubik’s Edge – More than a drinks coaster
Next More Super Mario analogue play