Over at Hasbro HQ they’ve been quietly rolling out their new sub-category in their gaming portfolio and it’s called Game Mashups. They’ve mashed up before and have a range called Mashems but they be in the figures/action toy category, this is a new and splendid idea in theory. We’ve seen people mash-up games at random whilst attending various board game gatherings, one particular memory was when Pictionary met Cards Against Humanity. 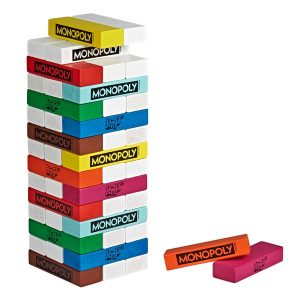 So, first out of the blocks for the Rhode Island outfit are Jenga with a Monopoly twist. Players pull out and stack the blocks based on Monopoly properties, spaces and places. Collect properties, property sets and railroad blocks before the tower crashes, pick the Go to Jail block and lose a turn. 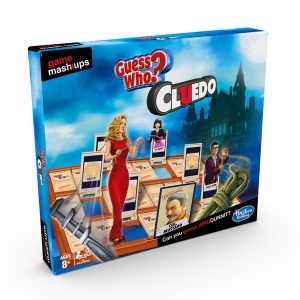 The other is Guess Who? With a Cluedo element. Players try to guess the suspect, murder weapon and scene of the crime by asking yes or no questions about their opponent’s cards in the grid and uncover the mystery by process of elimination.

Toyologist Pete Jenkinson regularly writes about toys in national newspapers like The Sun and The Mail. This super-dad has an unmatched passion and dedication for trying and testing the latest, coolest and most interesting offerings from the world of toys.
@toyologist
Previous Silent butt deadly – Introducing the Fart Ninjas
Next Hate Trivia Games? I’m Confident You’ll Like Confident?!