Harris and the Hamster – Littlest pet shop hilarity with Hasbro 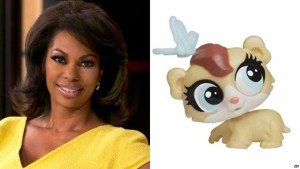 One is an anchor for Fox News the other the hamster friend of Littlest Pet Shop toy Benson Detwyler, a terrier. The former is suing toy maker Hasbro for over $5 million of their sale of the toy that shares her name and, one which Harris Faulkner says, resembles her. The resemblances she claims are in the hamsters complexion, eye shape and eye makeup design. Harris Faulkner, the one on the left, called it “demeaning and insulting” for Hasbro to portray her as a rodent with its Harris Faulkner hamster (the one on the right) and said the toy damages her credibility as a journalist. Now we can 100% see the name claim, seems a bit of a no-brainer Hasbro, just change the name of the toy, send her a few quid. Sadly, now that the lawyers have spotted an opportunity to make substantially more cash for themselves and their client they’ve persuaded her she looks like a hamster! We’ll keep you posted…If you’d like to grab one before they’re taken off the shelf they’re HERE

Toyologist Pete Jenkinson regularly writes about toys in national newspapers like The Sun and The Mail. This super-dad has an unmatched passion and dedication for trying and testing the latest, coolest and most interesting offerings from the world of toys.
@toyologist
Previous Bricks sent into space
Next Force Awakens playthings that fell under the radar