Furby gets a revamp inside and out

Peter Jenkinson July 1, 2016 Uncategorized Comments Off on Furby gets a revamp inside and out 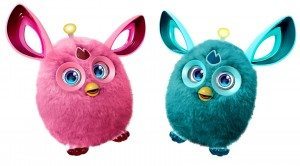 You’ll often see Furby referred to as cute and cuddly, for many however this is only the case when the battery runs out. This new incarnation of the brand Hasbro revived in 2012 might well be just the Furby we’ve been waiting for. Included in your purchase is a sleep mask accessory which slips over your interactive pet when you need some rest. This is Furby connect, a creature that reacts to sound and touch, the ability to utter over 1,000 phrases and, with a hundred different animations from its full colour LCD eyes, can express its moods. Connected to a dedicated app on your smartphone over Bluetooth there is access to a variety of content, videos, games, songs and when new content becomes available an antenna lights up and animatronics kick in too. So a Furby for the digital natives, certainly smart stuff going on inside and it feels like a real update rather than a tweak. Accordingly to accompany this shift in the abilities of Furby the  creature has had a redesign and we’re making room on our shelf for when its available to buy in August(UK) released on 12th July in the US and it’ll be £99 or $99 – Time for a trip to NYC me thinks

Toyologist Pete Jenkinson regularly writes about toys in national newspapers like The Sun and The Mail. This super-dad has an unmatched passion and dedication for trying and testing the latest, coolest and most interesting offerings from the world of toys.
@toyologist
Previous Mr Potato head – The one-off wonky one
Next Who? What? Where? – Give us a Cleudo