Force Awakens playthings that fell under the radar

Peter Jenkinson September 6, 2015 Uncategorized Comments Off on Force Awakens playthings that fell under the radar 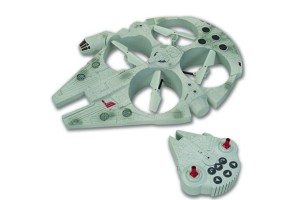 Much hype there was this friday past with the Disney embargo for the first wave of toy launches finally lifted. This was accompanied by an unprecedented global unboxing event online, late night store openings across the planet, media coverage a plenty and excitement levels akin to those of Christmas. The overwhelming winner, the one toy which was shouted about the most and given the highest praise from all walks of the press spectrum was the BB-8 from Sphero. An incredibly compelling purchase, this Bluetooth enabled, smartphone steerable, agile robot with autonomous mode has the ability to create holographic projections – It is an utterly superb bit of kit that we’ll be reviewing fully online this week via Trusted Reviews. We also loved the LEGO line-up, Hasbro offered some decent kit too but the Thinkway Toy range, which has gone largely un-noticed, has this pair of playthings which we think are going to be where the empty spaces are on toy aisles, selling out instantly. The U-Command AT-AT with sound effects, full R/C, pre-program combination moves and flashing lights is going to retail about £70 and the pictures Millennium Falcon Drone can well be excused those gaping holes as, in addition to its full R/C flight control, has built in stunts such as a 180 degree flip – Standard stuff for the Kessel Run.

Toyologist Pete Jenkinson regularly writes about toys in national newspapers like The Sun and The Mail. This super-dad has an unmatched passion and dedication for trying and testing the latest, coolest and most interesting offerings from the world of toys.
@toyologist
Previous Harris and the Hamster – Littlest pet shop hilarity with Hasbro
Next Reigning Champion