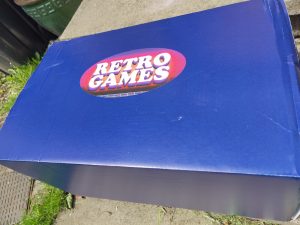 The Shuffle brand from the house of Cartamundi have created this line of iconic card games based on iconic films of yesteryear. They send us a bunch to celebrate their launch and packed the box with a random selection of items along with the game which did rather intrigue the cat who, of course, got into said box. 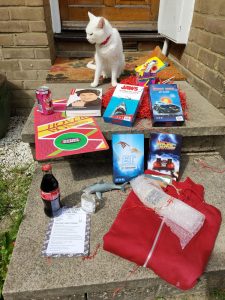 So, thanks for the mullet wig, selection of sweets, Long Island ice tea mix, fizzy pop and cardboard replica of Marty’s hoverboard. Here’s a lowdown on the games folks, all priced at £12.99. Knight Rid and BTTF get 5+ ratings, Jaws and ET get an 8+ and we’re still scratching our head on how this happened to the alien? Anyways, well worth a punt, if not for the artwork alone, shelf-worthy stuff to display indeed:

Lifelong rivals KITT and KARR go head-to-head in a destructive battle for victory. Who will triumph and who will end up a flaming wreck? Drain your opponent’s energy by racing around the map and performing stunts to either attack or defend. The player who avoids losing all their Drive cards at the end of the game wins. 5+

Do you have what it takes to protect the swimmer from killer Jaws? The great white hunts relentlessly beneath the surface, looking for lunch… and three innocent swimmers are still in the water! Will Orca be able to hit Jaws three times before eating three swimmers? 8+

Work together using Action cards to inspect and manipulate the Movie Deck to find ETs Phone parts hidden within. Find 6 parts to save ET from the Agent scattered throughout the deck. If you find all 6 Agents and lose all of ETs disguises, they will be captured and your mission will be over! 8+

Join forces with Marty McFly to get the Delorean to 88 MPH and go back to the future! The aim of the game is to clear all the Paradoxes by using Flux Energy cards. The problem is, all players are playing from the future and cannot communicate, you can only send signals! 5+ 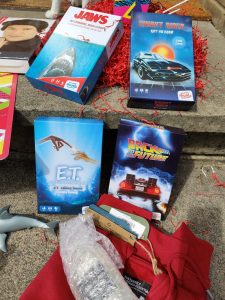 Toyologist Pete Jenkinson regularly writes about toys in national newspapers like The Sun and The Mail. This super-dad has an unmatched passion and dedication for trying and testing the latest, coolest and most interesting offerings from the world of toys.
@toyologist
Previous Hamley’s are kicking off a Summer of fun…..in Spring
Next Have a blast with the lights off