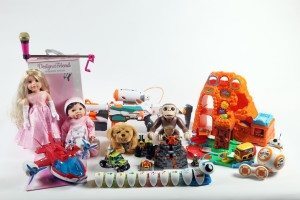 With only 191 days to go we’re in the habit of being uber-organised here at Toyology Towers so its helpful of Argos to tell us what’s set to be flying off shelves this Yule. As well as announcing their predictions Argos also did a survey on what kids want from their toys in ten years from now. From toys that tidy themselves away (all Mary Poppins like), toys that never run out of batteries, being able to imagine a toy and it appearing right there and being able to make an imaginary friend come alive – Some potentially realistic, fantastic insight from the minds that matter and one frankly slightly creepy idea.  And here, without further ado, is the list;

“This year’s list shows just how much toys are evolving – lots of our top toys have their roots in parents’ Christmas past,” said Linzi Walker, Top toy buyer for Argos.

“Now they’ve truly moved on, with more sophisticated tech, realistic life-like functions and up-to-date pop culture references. We’ve progressed from the toy caterpillar that toddlers could pull across the floor, to one that starts infants on the road to clever coding. Where once there was a baby doll that simply looked like the real thing, we now have one that smells as sweet as a newborn. And while past festivities might have featured a karaoke machine, 2016’s budding Beliebers will be making and sharing their own pop videos with a SelfieMic.

“With cross-generation appeal toys from LEGO, Nerf and Star Wars, households are expected to be lively and fun across the UK this Christmas.”

All toys will be available to buy via www.argos.co.uk from July 2016 onwards.

Toyologist Pete Jenkinson regularly writes about toys in national newspapers like The Sun and The Mail. This super-dad has an unmatched passion and dedication for trying and testing the latest, coolest and most interesting offerings from the world of toys.
@toyologist
Previous New LEGO Ideas sets approved
Next Playmobil getting paranormal