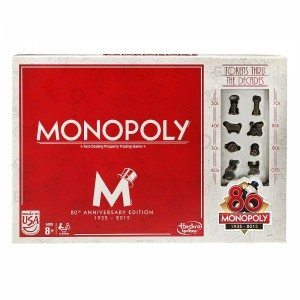 Fans of the property trading game have voted in their droves and crowdsourced the first Monopoly set for the forthcoming – Monopoly Here & Now : World edition. Hasbro have shared their list of cities that will make up the 22 slots around the new game when it arrives in the Autumn, and, without further ado, here they are :

So, we’ve discovered something we never knew about Peruvians this morning, that they were such fans of the game and landed Lima a prime dark blue slot (Hong Kong less surprising). Riga managed to bag a green space, nicely done Latvian voters. In total over four million votes were cast via Buzzfeed from 182 countries, if Hasbro can sell just a small % of the voters a set they’ll have done rather well. “Inviting our fans to get involved in the creation of the newest MONOPOLY game was a great way to celebrate the 80th anniversary of the brand,” said Kay Green, Hasbro UK Marketing Director – We’re rather inclined to agree with you there Kay. The new Here & Now World edition game will feature iconic landmark tokens and a new gameplay where you’ll race about the board visiting as many locations as you can and picking up passport stamps along the way, collecting  cash from visitor fees when others land on your locations – first with a full passport wins, sounds pretty good. The 80th Anniversary Edition pictured is available now

Toyologist Pete Jenkinson regularly writes about toys in national newspapers like The Sun and The Mail. This super-dad has an unmatched passion and dedication for trying and testing the latest, coolest and most interesting offerings from the world of toys.
@toyologist
Previous Looking over a Four leaf clover
Next Top Gear twist on an old classic toy